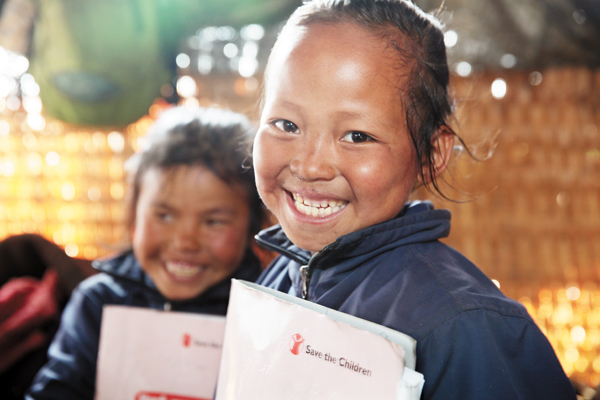 Doma, right, and Bishno, both of whom lost their parents in the April 25 earthquake last year in Nepal, are laughing in their new home in Rasuwa District, where they were adopted by a monk and his parents. Doma’s favorite class is English, and Bishno’s is mathematics. [SAVE THE CHILDREN]

Rasuwa, Nepal - In a region once pulsing with trekkers who made the long journey north of Kathmandu just to glimpse the ragged, icy peak of Langtang Lirung, there isn’t much left in Rasuwa today except the hush of village life and the calm of farmers living out their peaceful lives in makeshift tents and houses made of straw.

The 7.8-magnitutde earthquake that hit the country last April left more than 8,800 dead. Rasuwa District was one of the regions hardest hit, with some 8,000 houses crumbling away, leaving 430 dead and 753 injured out of a population of about 40,000 people.

With more than half of Rasuwa sitting above 3,000 meters (9,842 feet), relief workers struggled to make way into the region.

When I arrived at Rasuwa on March 22, the Nepalis I met didn’t look like people who had only a year ago witnessed death firsthand; men and women, rich and poor, young and old were spraying and painting each other with brilliantly colored powders in celebration of the Holi Festival.

Beyond the festivities, village women chatted away in low tones and fed the livestock while children ran freely in the fields. Life for them, it seemed, was gleeful. It wasn’t until I visited their homes that I saw what they have been through.

“It happened around noon that Saturday when we were talking outside,” recalls Phurpu Tamang, a 34-year-old owner of a guesthouse in Gatlang village. “It felt as if the sky was shaking. You could hear people shouting ‘get out!’ in the midst of the chaos.”

While many villagers were farming in the fields and were able to escape the calamity, most of their houses were demolished in the earthquake.

“For the first three to four days,” he says, “we drank nothing more than salt water, but after a while some neighbors who were better off than us began to share their food. We wouldn’t be alive otherwise.”

Despite assistance from nonprofit organizations like Save the Children and the UN Children’s Fund, many Nepalis here still live in tents or makeshift homes fashioned from straw stacks and metal sheets.

But their dreams have not been knocked down. Phurpu points to a note on the wall in his house, written by his daughter Rebecca. It reads, “My dream is to become a doctor.” 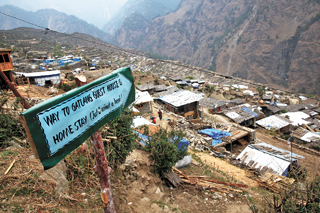 After about 8,000 homes were destroyed in the earthquake, many villagers now live in makeshift homes. [SAVE THE CHILDREN]

The earthquake destroyed 98 of the 101 schools in Rasuwa, but Rebecca hasn’t given up on her education. She attends a temporary learning school set up by Save the Children Korea. There are 25 such schools in the region. Save the Children has also provided the kids with textbooks, schoolbags and other school supplies.

At Rebecca’s school, I meet Basang Tamang (the villagers, regardless of family relations, take their last names from the local tribe, Tamang).

The 14-year-old nods and smiles shyly when I ask her if I can take a photo of her. It takes her two hours to come to school, she tells me, and three to return home.

The Nepali staff of Save the Children and I decide to walk home with her after school. The trek is indeed long and hard and after hiking up to a dizzying height, we find her temporary home, made entirely of stacks of straw.

Basang’s mother, who has just returned from working in the field, ceaselessly tugs at my arms, pulling me into the house and gesturing at me to sit down and be comfortable. Her husband, who recently came down with an illness, is lying under a blanket.

“Sure, the situation isn’t great, but I know a better day is coming,” Basang says, laying down her outdoor clothes and folding them neatly to one side. “I’m so happy I can still go to school. I want to become someone who helps other people. That’s why I study so hard.”

Save the Children staff member Tripura Oli says not everyone was eager to build schools when the idea was first proposed.

“The villagers asked, ‘What good will a school do now?’ but more students, like Basang, are now harboring new dreams,” Tripura said. “It may take time, but I believe education will be the way for Nepal to rise again.”

Later I meet Doma and Bishno Tamang, 7-year-old cousins, at the school playground. Having lost their parents last year, they were sent to a temporary shelter until a monk adopted them and sent them to his parent’s house.

Now they both dream of becoming doctors one day.

“My uncle lives in a different village and he told me his eyes hurt a lot. The first thing I will do after I become a doctor will be to cure his illness,” Bishno says.

When asked what she loves most, Doma answers without a second thought, “Riding the swing with Bishno!” Then she adds, “my grandparents,” referring to the monk’s mother and father.

Her grandmother, Plektang Tamang, says the two sometimes come home crying when their friends ask them why they don’t have parents.

“But I am thankful,” she says, “that they are growing up healthy and bright.”

Phurpu says they still get scared even when there’s a minor vibration, but adds, “I know that we will continue to protect this village.”

The Nepalis of Rasuwa are constantly concerned with whether I have slept well or feel cold. They can only be satisfied after asking a couple of times, and maybe a few times more after that, and they smile in satisfaction when I have nodded sufficiently.

And, of course, they never forget to offer a cup of tea.