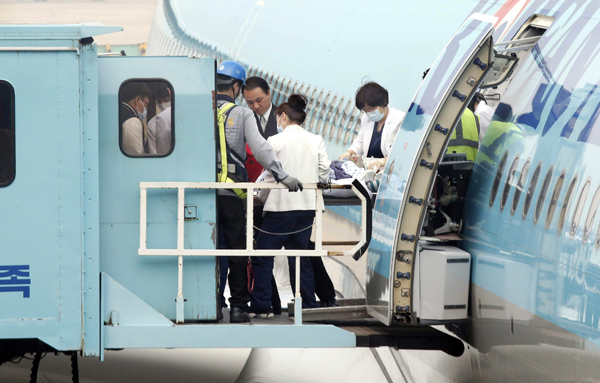 The transportation of Ha Sang-suk came days after local authorities announced late last week plans to help the 88-year-old fulfill her last wish of spending the rest of her life here, by transporting her to Korea to have an operation and covering her medical expenses.

At age 17, Ha was forced to work at a Japanese military brothel in China during World War II. She continued living there after the war, marrying a Chinese man and raising three stepdaughters while working at a textile factory.

Ha returned to Korea in 2003 and lived here for a little less than three years before deciding to go back.

The Ministry of Gender Equality & Family announced plans to reimburse most of her accumulated medical bills by providing 48 million won ($41,664) to Ha and her family. The rest, 12 million won, will be covered by local nongovernment organizations. Upcoming surgeries will be financed by the government and other sponsors, the ministry added.

Upon her arrival here on Sunday, she was immediately transported to Chung-Ang University Hospital in Dongjak District, southern Seoul, for treatment.

Ha has suffered from severe injuries since mid-February after falling down from a staircase during an altercation with a neighbor. Her ribs and hip were fractured, which led to her hospitalization at an intensive care unit at a Chinese hospital. She initially lost consciousness but recovered soon afterward.

While it remains unclear exactly when discussions began between Ha’s family and the Korean government to bring her here, the Ministry of Gender Equality & Family unveiled the current plans on Friday, adding that it recently dispatched a local delegation of doctors and was told on April 3 that she would be able to make the trip.

Ha boarded a Korean Air flight on Sunday around noon and arrived in Incheon around four hours later, remaining on a stretcher during the flight. Doctors from Chung-Ang University Hospital and the ministry accompanied here on the trip, as well as her third daughter.

Doctors did not specify how long Ha will stay at the hospital. Ministry officials did not say whether she will stay in Korea following the treatment, saying they will ask Ha her preference after she fully recovers.