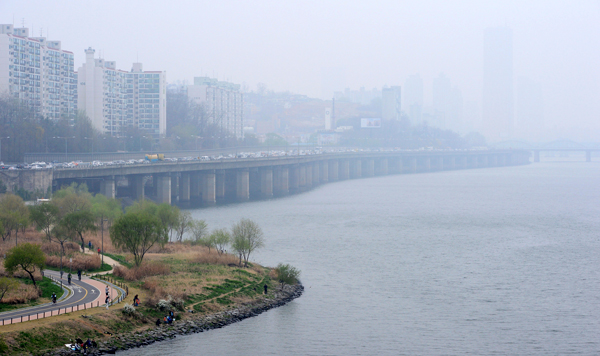 A view from the Dongjak Bridge in central Seoul as the city was blanketed with smog on Sunday afternoon. A fine particle warning was issued for the city for three consecutive days starting Friday. [NEWSIS]

Seoul issued a fine particle warning for the third consecutive day on Sunday as a noticeable haze blanketed most of Korea over the weekend.

The government issues a warning when the average concentration of fine particulate matter surpasses 150 micrograms per cubic meter for at least two straight hours.

The Korea Environment Corporation has pointed to China as the primary origin of the hazardous air pollution, asserting that heavy industries there are generating the fine particles.

Conditions will likely improve from Monday, the agency said.

Although the annual springtime spike in air pollution was anticipated, the Korea Environment Corporation was harshly criticized over the weekend for failing to predict the exact timing.

The agency said Friday morning that conditions would be “moderate,” only to later issue a warning in the afternoon. On Saturday, officials announced that the levels were similar to the day before, but they actually peaked at “very bad,” indicating a concentration of fine particles over 150 micrograms per cubic meter.

As to why it failed to properly forecast the air quality, an insider from the Korea Environment Corporation explained that the smog from China was expected to pass over Korea in the upper atmosphere, but it instead sank downward toward the ground.

But a closer look at the government’s budget plans suggests that financial issues might have had a role in the mishap.

The Korea Environment Corporation, which is affiliated with the Ministry of Environment, has a fairly low accuracy rate of 60 percent when it comes to forecasting air pollution.

In March, the government announced after a policy coordination meeting that the Environment Ministry would introduce sophisticated forecasting technology by January 2017 that would issue fine particle warnings at least 48 hours in advance.

But the required expenses were eventually omitted from the ministry’s annual budget. Many critics claim that the air pollution forecasting method currently used in Korea, imported from the United States, is inappropriate for domestic use due to geographical differences between the two countries.