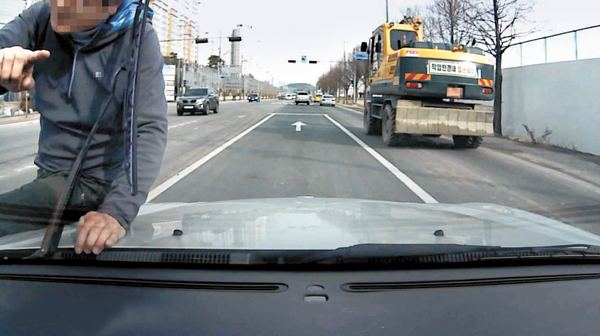 A truck driver surnamed Lee, 33, climbed onto the hood of a fellow driver’s car and threatened the driver for excessively honking at him. [A SCREENSHOT OF A VIDEO FROM A BLACK BOX]

After a gas delivery truck pulled in front of a sedan, the driver of the sedan, a 26-year-old man surnamed Yoon, began honking at the truck. The truck driver then began chasing Yoon’s car, and when the two came to a red traffic light, the truck driver got out, came over to Yoon’s car and screamed at him, demanding that he get out and apologize.

This scene was captured through Yoon’s black box and submitted to the Gunsan police. The truck driver was sent to the prosecutor’s office on March 31, after police requested that he be indicted on charges of assault and property damage.

The number of road rage incidents has recently soared, according to the National Police Agency. The police conducted a major crackdown on road rage over a 46-day period from February and March, criminally booking 500 cases, which amounts to 10.9 incidents per day, a stark increase compared to 273 in last July. Reports on such traffic incidents during the crackdown amounted to 1,151.

JoongAng Ilbo exclusively obtained 37 videos of road rage incidents from the National Police Agency and analyzed the videos with the help of Sul Jae-hoon, a researcher from the Korea Transportation Institute, to identify the cause and types of road rage. According to the study, the most common factor causing these incidents was excessive honking, as 32.4 percent of the cases happened as a result of it.

“Honking multiple times for more than three seconds went beyond its purpose of alerting fellow drivers of dangerous situations, irritating them instead,” said Sul.

The second most common cause was sudden lane changing, which instigated 27 percent of all cases, followed by sudden breaking, causing 16.2 percent.

Last December, at 2:15 p.m., in an intersection in Ansan, Gyeonggi, a driver surnamed Kim, 49, attempted to run another driver, a 33-year-old woman named Seo, off the road after she would not let him overtake her.

On March 11 in Tanbang, western Daejeon, a road chase between a BMW sedan and a motorcycle took place. The driver of the BMW, surnamed Lim, 31, chased the motorcycle for one kilometer (0.6 miles) after it cut in front of him in traffic. Lim eventually struck the motorcyclist, severely injuring him, and was later arrested by the Daejeon Police Agency.

“Only by turning on the blinkers when abruptly entering another lane, as a sign of apology, can one reduce the possibility of being harmed from road rage,” advised Professor Kim Pil-soo from the department of automotive engineering at Daelim University.

The most common method of road rage was stopping one’s own car horizontally to block another car, with 29.7 percent of road rage incidents using this method. Sudden breaking followed next, accounting for 21.6 percent, followed by switching traffic lanes multiple times, at 16.2 percent, and forcing cars aside, which constituted 10.9 percent, according to the study.

“People’s excessive desire to correct wrongdoing is what leads to people use their own cars as blockades,” said Professor Kim Byung-soo from the psychiatry department of Asan Medical Center in Seoul.

“Road rage is a malicious act, using one’s car as a lethal weapon to show other drivers that you’re angry,” said researcher Sul. “Even if the anger was spurred on by someone else, the act cannot be justified.”

According to a survey conducted by the Korea Transportation Institute on 1,030 drivers, 40.6 percent of them answered that they have, at one time or another, been a victim of road rage.

“Criminally punishing the drivers isn’t a master solution,” said Professor Kim, who pointed out that, in Japan, people learn to drive slowly and safely, and that this helps create a friendly traffic culture.

Psychiatrists recommend mental training that would allow people to control their anger.

“When you’re furious, try to take a deep breath for about 10 seconds,” said Professor Lee Hae-guk from the psychiatry department at Uijeongbu St. Mary’s Hospital. “If people imagine how the situation will end up if they become angry, it will help them tolerate their anger.”

The National Police Agency announced on Tuesday that it will administer a 6-hour-long mandatory education program, originally given to reckless drivers, to people who commit acts of road rage.