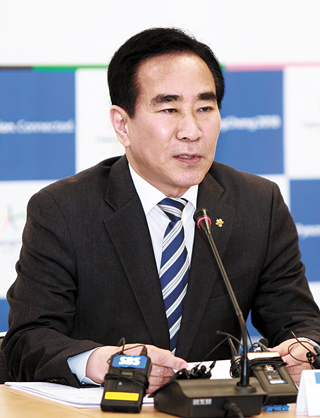 During the regular press briefing in Seoul yesterday, the PyeongChang Organizing Committee for the 2018 Olympic & Paralympic Winter Games (Pocog) disclosed that a total of 1.17 million tickets will be sold for the opening and closing ceremonies as well the events. Seventy percent of the tickets will be sold domestically and the remainder will go to overseas buyers, according to Pocog. Sales revenue from the tickets is estimated to reach approximately 174 billion won ($152 million).

“We have consulted with the International Olympic Committee (IOC) as well as the federations in Korea for each event,” said Pocog Secretary General Yeo Hyung-koo yesterday during the briefing. “We also referred to past winter games and other big events that occurred in South Korea and conducted market research in eight countries outside of Korea to finally set the price for the tickets.”

Ticket prices will vary between 20,000 won and 1.5 million won. According to Pocog, 50 percent of the tickets will be sold for 80,000 won or less to make them affordable. The average price will be about 140,000 won, similar to the 2010 Vancouver Winter Olympics but less than the 2014 Sochi Winter Olympics.

For popular events such as short track, figure skating and speed skating, ticket prices will start from 150,000 won. Other disciplines including bobsleigh and skeleton will be more affordable, with prices starting at 20,000 won.

Tickets for the opening and closing ceremonies will be the most expensive at between 220,000 won to 1.5 million won, the organizing body said.

The organizing committee will also offer 50 percent discount to war veterans and the handicapped, as well as to people over the age of 65 years and children.

Tickets will be sold on the Pocog website starting from October this year for people living in Korea, who can also purchase them on their smartphones. Offline vendors located in various airports, train stations, ticket centers and other locations will also be open starting from November. For audiences overseas, tickets will be offered via authorized resellers in each country.

Pocog said it will announce ticket prices for the Paralympics early next year, and that the prices will be relatively low with many discount options.

“The PyeongChang Olympics is the first Olympics taking place in Korea in 30 years after the 1988 Seoul Olympics as well as the first winter games in Korea’s history,” said Yeo. “Pocog will work closely with the national and regional government to offer the content and experiences that can only be seen in Pyeongchang in 2018.

The PyeongChang Winter Olympics are slated to take place from Feb. 9-25 in 2018 in 12 different venues in Pyeongchang, Gangneung and Jeongseon, hosting seven sports, or 15 disciplines.