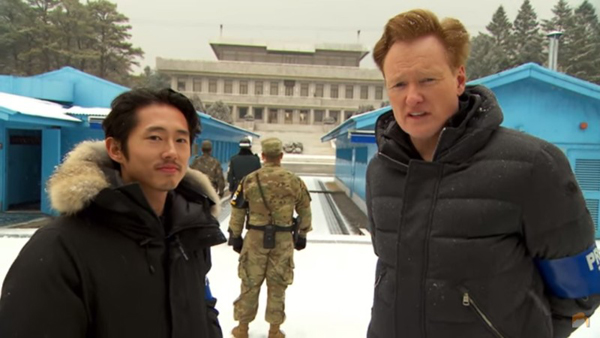 Conan O’Brien’s recent tour of Korea was unveiled Saturday on an episode of his late-night talk show, “Conan,” on TBS.

TeamCoco.com, the official website for the show, uploaded 10 different three to five-minute videos of the comedian’s tour.

Starting with an introduction to his motives behind the five-day trip in February, the segments featured bits and pieces of O’Brien’s tour, from Korean fans’ enthusiastic reception at Incheon International Airport and shopping at the Noryangjin Fish Market to visiting Panmunjom, the Joint Security Area at the border between South and North Korea.

During his time in Korea, O’Brien made a couple of local media appearances, including in a music video with popular singer and music producer Park Jin-young. The music video for the song “Fire,” featuring the American star, was unveiled on Saturday as well.

O’Brien visited Korea after receiving an invitation letter creatively written on a standardized test scantron from Sunny Lee, a fan of his show. His visit garnered much attention from Korean media and fans.