Giant Chinese tour group gets a date with Psy

Giant Chinese tour group gets a date with Psy 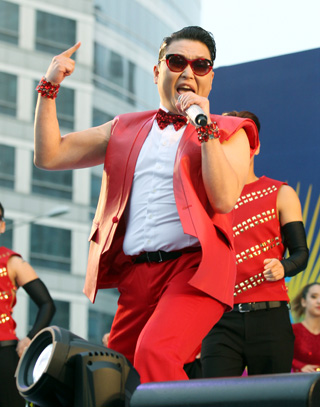 “Gangnam Style” star Psy performs on a stage in Yeongdong-daero during the FIFA World Cup match between Korea and Russia in 2014.

Psy will perform his gallop-dance in the middle of a street in Gangnam on May 8 -- surrounded by 4,000 Chinese tourists.

A section of the 14-lane Yeongdong-daero from Bongeunsa Station to Samseong Station will be sealed off for the K-pop concert -- a total space of roughly 35,000 square meters (8.6 acres) – especially for the visitors from China.

The 4,000 employees of the Nanjing Zhongmai Science and Technology Development Company, who are visiting Seoul on an incentive tour, will be chauffeured into Gangnam on 100 buses, which will park on the school grounds of Gyeonggi High School, less than 500 meters (1,640 feet) from Bongeunsa Station.

The Seoul Metropolitan Government and Gangnam District Office expect to a total crowd of some 20,000 for the concert.

Following the success of Incheon’s hosting of 4,500 employees of Guangzhou-based cosmetics company Aurance in March, Seoul went one better by snagging an 8,000-strong group, who will come in two separate batches.

The first will visit Seoul from May 5 to 9, and the second from May 9 to 13. The K-pop concert is scheduled for May 8, the final night in town for the first batch.

“Hosting a K-pop concert for the Chinese tourists will be a turning point for Seoul’s tourism industry,” said Li Lei, who works in the tourism business department of the Seoul city government. “Chinese tourists who come to Seoul usually don’t visit again, because there isn’t much to do other than shop.”

“The tourism industry in Seoul is limited to Myeong-dong and Gwanghwamun in central Seoul,” said Lee Hoon, professor of tourism department at Hanyang University. “Extending the industry into the Gangnam District of southern Seoul and making use of Korea’s pop culture will help develop the city’s tourism industry

The incentive tours of Aurance and Nanjing Zhongmai were landed by the city governments’ MICE (meetings, incentives, conferencing and exhibitions) industry divisions.

According to the Korea Tourism Organization, tourists who visit the country via invitations from the MICE industry, which includes incentive tours by companies, spend 1.8 times more per person than regular tourists.

The Seoul Metropolitan Government said that 60.4 percent of tourists who visit Korea via MICE industry invitations are traveling on company incentive or reward trips. In 2014 the total number was 940,815 and the number on incentive or reward trips was 568,642.
The 8,000 Nanjing Zhongmai employees will be staying in three to four hotels, including the Hotel Shilla.

Seoul expects to rake in as much as 20 billion won ($17 million) from the group’s nine days in the city.