What makes a real promise?

What makes a real promise? 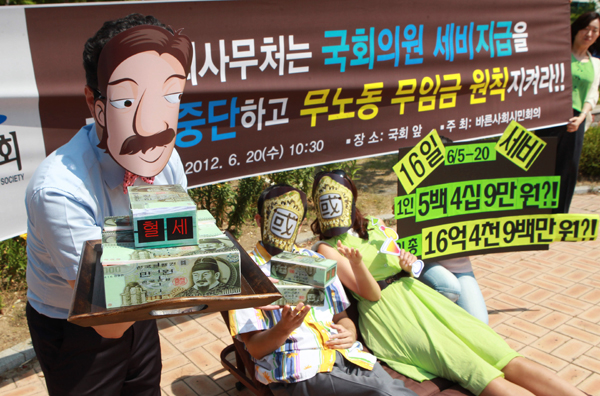 The bald-hairy pattern has continued among the leaders of the former Soviet Union and Russia. Vladimir Lenin, who seized power through the Bolshevik Revolution in 1917, was bald, and his successor Joseph Stalin was hairy. Nikita Khrushchev was bald, and Leonid Brezhnev was hairy. The trend continues till today as Vladimir Putin is balding.

What about Korea? First of all, we need to clarify who was bald and who was not. While Chun Doo Hwan was obviously bald, cases of Syngman Rhee and Kim Young-sam are harder to pin down. In fact, how can you tell the difference if someone has a broad forehead or is just going bald? Ambiguity always leads to controversy.

On April 4, the ruling Saenuri Party announced its campaign pledge titled “Contract with the Citizens.” Forty-eight candidates, including party leader Kim Moo-sung, promised to give up a year’s salary if they failed to meet five key pledges, such as client-contractor relationship reform and employment regulation reform, by May 2016.

Four years ago, the Saenuri Party declared that the lawmakers who did not faithfully fulfill their duties would have to give up their salaries. Unfortunately for them, the National Assembly was deadlocked due to its fierce battle over many disputes, and over 140 party members had to return 1.5 billion won ($1.3 million) for the month.

But it was a one-time show. After a while, no one mentioned paying back their salaries. In 2014, the legislature stalled for four months, but the party did not keep the promise.

The calls to give up salaries are politically motivated. In early 1991, the then-ruling Democratic Liberal Party lowered its members’ salaries and returned the difference. But in the previous year, they raised salaries by 22.8 percent, and when workers tried to use this number as the base for increasing their own wages, the ruling party lowered the increase to 10.4 percent and returned the difference.

Perhaps this time is even more insincere. The ruling party vaguely proposed to “attain client-contract relationship reform for all” — without any specific goals. They can conveniently say that they have done enough.

The main opposition Minjoo Party of Korea has also made some ambiguous promises. Former Chairman Moon Jae-in said on April 8, “If voters in Honam [South and North Jeolla] take away their support in the April 13 general election, I will retire from politics and not seek candidacy in the presidential election whatsoever.” But he did not specify what “taking away their support” means.

A sincere promise needs to involve specifics. Otherwise, it cannot be seen as anything other than an attempt to fool citizens.