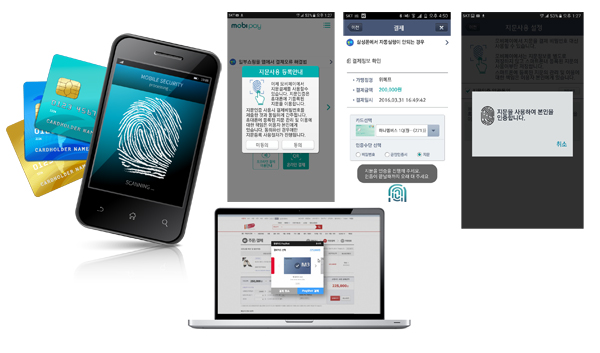 From upper left: KEB Hana Card’s MobiPay, a mobile card app, enables a one-stop payment by requiring a user to register his or her fingerprint to the smartphone as a means of self-verification. Once registered, the user can make payment easily by holding on the fingertips for seconds. Lower center is Hyundai Card’s one-stop payment service called PayShot, which is available both on mobile and personal computer. Once registered with a Hyundai Card ID and password on a shopping mall website at the very first purchase, the user can make payments without punching in the information next time. [KEB HANA CARD, HYUNDAI CARD]

Credit card companies are introducing new services to make payments less complicated as part of efforts to keep existing customers from being lured away by the services offered by IT giants.

KEB Hana Card on Monday announced it will launch a one-stop payment service by the end of this month that only requires users to scan their fingerprints for few seconds when paying with a mobile credit card. It is the first Korean card payment service that allows for verification through a biometric technology.

The new function will be added on the card company’s existing mobile card app Mobi Pay, which currently requires users to use passwords and the state-run self-verification module, which requires the installation of the notorious Active-X plug-in.

Hyundai Card also recently launched a new service called PayShot, which only requires a cardholder to input their Hyundai membership ID and password during their very first purchase on an online mall, keeping the information saved for subsequent purchases.

The service is compatible with major online open markets, ranging from 11st, Auction and G Market to the online shops of offline retailers like CJ, Lotte and Shinsegae, using the card company’s vast membership network.

Such moves are part of the credit card industry’s attempt to keep their lead in the payment market as new rivals like mobile device makers, mobile service operators and telecom carriers are moving aggressively to expand their customer base.

Naver and Kakao, which have jumped into the mobile and online payment market since last year, have recently introduced a plastic check card by collaborating with Shinhan Card, the No. 1 player in the conventional card industry.

LG Electronics is currently working on its own payment service for its new smartphones by collaborating with Shinhan and KB Kookmin Card. The so-called LG Pay reportedly involves the use of a plastic card that can carry multiple digital cards, allowing a user to switch between them and make payments at all regular credit card readers.

But experts say credit card companies should focus on coming up with special perks for their customers instead of simply collaborating with IT giants or investing in developing their own easy-pay services.

“Card companies are introducing their own similar easy-pay systems, but they can never win against IT giants in terms of the number of users,” said Yoon Jong-moon, a researcher at the Credit Finance Research Institute. “The companies should develop their own customer strategy instead of simply relying on fees generated from cooperating with IT giants.

Samsung Electronics, Naver and Kakao already control more than half of the easy-pay market by number of users because those with Galaxy smartphone or who use the platforms are inclined to choose the most easily accessible easy-pay service, according to Yoon.

As competition has gotten fiercer, the local easy-pay market has grown sharply to about 6 trillion won ($5.23 billion) as of last year, from 1.13 trillion won as of the first quarter 2013, according to Statistics Korea.