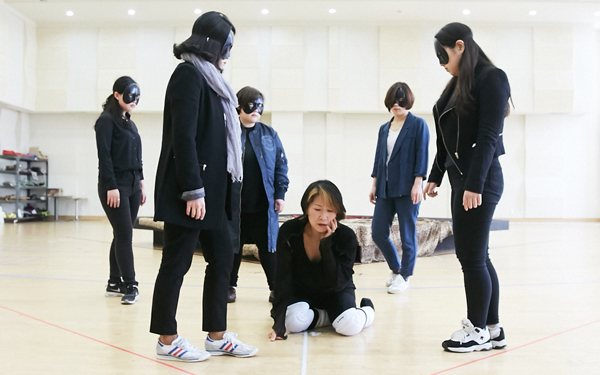 Soprano Lee Yun-ah, who plays Rusalka, practices a scene from the opera where she finds out that the prince has betrayed her love. [korean national opera]

The Korean National Opera will hit the stage with the Korean premiere of the opera “Rusalka” from April 28 to May 1 at the Seoul Arts Center.

The opera was composed by Antonin Dvorak(1841-1904), a Czech composer known for his masterpiece “New World Symphony.” Its story is based on the novel “Undine,” written by a German novelist Friedrich de la Motte Fouque which became the basis for tragic love stories of a mermaid and her human lover that were produced later - most notably “The Little Mermaid,” an animated movie produced by Disney.

A water nymph named Rusalka falls in love with a prince. She visits a witch named Je?ibaba, who turns her into a human being, with one condition: if she and the prince don’t keep their love, the prince will die in pain. The prince promises his eternal love with Rusalka but soon betrays her, falling in love with another seductive woman. When the prince realizes his grave mistake, he asks for forgiveness and she replies with the kiss of death, hoping to end the curse.

“‘Rusalka’ is an opera that shows sharp contrasts between the fairy of water, Rusalka, who represents nature and the prince who symbolizes civilization,” the artistic director of the National Opera Kim Hak-min said during the press interview. He also stressed that the upcoming opera can be understood as “a story of an innocent young woman that begins to face harsh realities of the society.”

The Korean production of the opera captures attention because of its somewhat groundbreaking organization of staff, completey consisting of Koreans. While opera is an area that is said to lack qualified Korean artists and experts, the National Opera has plans to create a new environment to develop domestic artists who can express their musical talents. It is directed by Kim himself, conducted by conductor Chung Chi-yong and choreographed by Kim Yong-geol.

Soprano Lee Yun-ah and Seo Sun-young take the role of Rusalka. Lee has a strong presence in the United States, having performed with New York City Opera in “La Boheme” and “Carmen” and in various repertoires in Europe and Korea as well. Seo was the winner of the International Tchaikovsky Competition in 2011 and had worked with Theater Basel of Switzerland. Tenor Kim Dong-won and Kwon Jae-heui will play the prince. The opera singers have been practicing hard in order to perform in Czech.

“I could sympathize with Rusalka when I imagined the pain that she has as someone who can do nothing but witness her lover’s death,” Seo said during the press interview.

Although there were voices of concerns, Kim expressed his confidence in the opera, saying “It has been four years since we tried to work with Korean artists.”

The National Opera seems to have its own thoughts on how to bring the genre to the public, which has often been perceived as too difficult and removed.

“This is why we are performing Rusalka, which features a plot that the public is already familiar with,” Kim said. “Although this piece can be easily understood, it has a lot of room for profound thinking inside the musical depth of Dvorak’s music.”