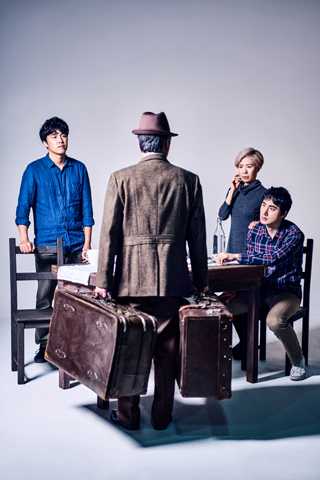 Arthur Miller’s “Death of a Salesman” will be staged at the Seoul Arts Center from April 14 to May 8. [SEOUL ARTS CENTER]

Arthur Miller (1915-2005) is one of the greatest writers in American theater, leaving numerous masterpieces including “All My Sons,” “The Crucible” and “A View From the Bridge,” which reflect the harsh realities of American life in the mid-20th century and how people dealt with them - for better or worse.

From April 14 to May 8, the Seoul Arts Center will present “Death of a Salesman,” a play written by Miller in 1949. It is his best-known work.

Inspired by the Great Depression of the 1930s, Miller wrote about how an American everyman, salesman Willy Loman, is destroyed by economic depression, the merciless characteristics of capitalism and how the American dream can turn to nightmare.

The piece dissects the psychology of a family that can’t tell the truth to each other and struggles to make payments on layaway purchases. It shows how a family that lives by pretense meets tragedy. The play describes the psychology of Loman, a successful salesman who loses his job and can’t earn any money after the Great Depression. He has blind trust in his eldest son Biff, but never listens to what his son says.

The play takes place in the United States during the postwar period in the late 1940s. But director Han Tae-sook says it resembles some of the harsh realities that Korean households face these days. She said that people will be able to reflect on their own lives by watching the characters desperately trying to survive. It is the story of a father and husband who falls behind major societal changes and sons that are rejected by a harsh society even before they start their careers.

“Miller was a delicate writer, and his play can appeal to an audience even today,” said Go Yeon-ok, a scriptwriter who adapted the play into Korean.

The set is a crucial part of the play, conveying the emotional pressure on the protagonist with a huge 9-meter (30-foot) structure and videos. The walls on each side narrow as the play proceeds, and the ceiling is designed to feature a particular object which is “hung on the stage in order to symbolize the greed of Willy Loman,” the director said.

This Korean production of “Death of a Salesman” should captivate the audience with its timeliness and artistry. The Seoul Arts Center will also offer theatergoers a 15-minute special lecture on the play on April 21 and 28. A study guide will also be provided online for free, which was co-produced by the arts center and Minumsa, a publishing company, at the official websites of the two organizations.