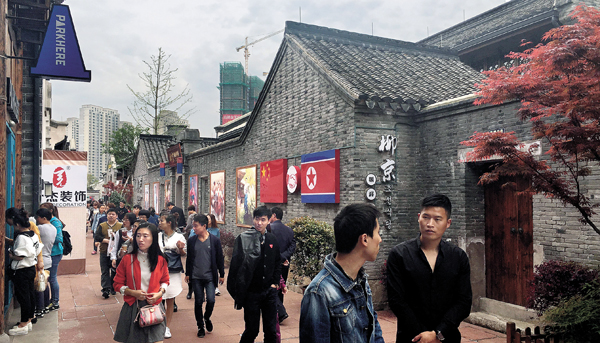 Chinese pass a North Korean state-run restaurant in Ningbo in eastern China’s Zhejiang province on Sunday, where 13 North Koreans used to work before defecting to South Korea. The restaurant closed last Thursday, when the defectors arrived in the South. [SHIN KYUNG-JIN]

China blew off North Korea’s complaints about 13 defectors escaping to South Korea from the city of Ningbo in Zhejiang province, saying it had no role to play in blocking them.

One male manager of a North Korean-run restaurant in Ningbo and 12 of his female employees defected to the South last Thursday, as sanctions against North Korea forced customers to stay away. It was the largest single group of North Korean defectors under Kim Jong-un’s leadership.

Allegedly, the restaurant was pressured to remit the same amount of money even after customers stopped coming.

“After the South Korean government’s announcement, a North Korean government official expressed his country’s regret to the Chinese local government in Zhejiang province,” a source who has knowledge on the situation in China told the JoongAng Ilbo on Sunday, confirming that the restaurant was in Ningbo.

“The North Korean official expressed regret that China couldn’t block the defections due to the lax security of the Chinese police,” the source quoted the Chinese government official as saying.

The official dismissed the North Korean official’s regrets, saying, “We don’t have responsibility, and anyone who has a legal passport can go anywhere they want.”

The source said the defectors used their North Korean passports when they left China, unlike in previous cases, when defectors feared being blocked from leaving China because of Beijing’s closeness to Pyongyang.

Another source who has knowledge of North Korea said Monday that Pyongyang believes China deliberately didn’t stop the latest defectors.

China recently loosened the reins on North Koreans who illegally stay in China or try to leave for another country.

Most North Korean defectors in the past smuggled themselves into a third country such as Thailand or Myanmar and contacted the South Korean embassy in the country.

Pyongyang state-run media has not mentioned the latest defections.

The South Korean government said the defections demonstrated the effect of new sanctions against North Korea for its nuclear and missile tests.

Alongside a UN Security Council resolution from March 3, the South Korean government on March 8 announced its own set of sanctions on Pyongyang, advising South Koreans not to visit North Korean restaurants overseas, particularly in China, as they function as sources of hard currency for the regime.

Pyongyang operates 130 restaurants in 12 countries, which earn a total of $10 million for the regime annually. They have seen customers dwindle since the adoption of UN sanctions and South Korea’s unilateral sanctions.

It was the first time that North Koreans working at the same restaurant defected as a group, unlike previous cases in which North Koreans escaped individually or with family members.

Meanwhile, a South Korean intelligence official told the JoongAng Ilbo that there are up to five defectors who worked at the same restaurant currently waiting in a third country to come to South Korea.

The official said they are likely to arrive in South Korea as early as this week.