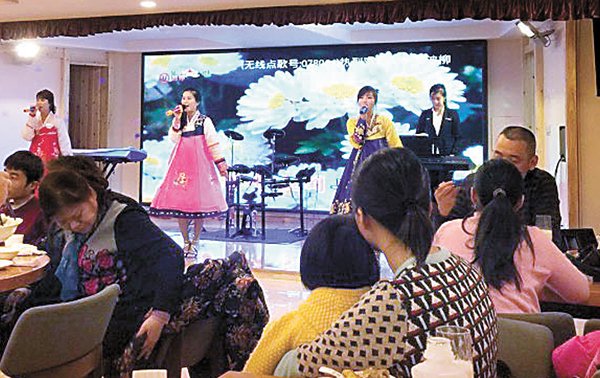 When the JoongAng Ilbo visited one of Pyongyang’s overseas restaurants in Beijing’s Chaoyang District last week - the same day that a group of North Korean restaurant workers defected to the South - the restaurant was relatively full.

The reporter visited around 9 p.m. on Thursday. “They say South Korean customers have dwindled,” one employee at the restaurant remarked jovially, “but see, there’s no effect on our business.” Indeed, the seats were generally filled with South Korean and Chinese customers.

The South Korean government has advised its nationals against frequenting North Korean restaurants because they are a source of foreign currency for Pyongyang’s regime.

However, the restaurants have various ways of keeping customers coming back, whether they be South Koreans or locals.

In Beijing last week, once the food was delivered to the table, two North Korean women took to a microphone to perform. Instead of the expected repertoire of North Korean pop songs, they performed a series of songs without glancing at music or lyrics, including the popular South Korean song “Tears of Mokpo,” an oldie dating back to 1935.

When the reporter asked one of the performers, “Is it okay to sing such songs?” the restaurant employee replied, “There is no problem because it is a song that dates back to before liberation [from Japanese colonial rule which lasted from 1910 to 1945], so it is a song we can all enjoy.”

They were surprisingly skilled musicians, and one regular customer remarked, “It’s a song I haven’t heard here in the past. In such difficult times, it seems like they are putting in immense efforts, introducing a new repertoire to draw in customers.”

North Korea’s Chongryugwan restaurant in Shanghai was once a key destination for South Korean tourists, located conveniently on the way to Shanghai Hongqiao International Airport. It was especially popular because of its friendly staff, who would hold conversation with South Korean customers.

The employees at this restaurant explained that tourism and hotel management majors at Jang Cheol Gu Pyongyang Commercial University are required work at an overseas restaurant for up to two years.

Female students at the university, usually in their second or third years, are required to spend an internship at one of the North Korea restaurants abroad before they can graduate.

When asked if they could contact their parents often, an employee replied, “We do not have cellphones, so we cannot call. Instead, we write letters.”

The employees tell customers, “If you buy a bottle of liquor and bring it back to South Korea, it will make a good souvenir.”

Most customers leave the restaurant with a bottle of North Korean liquor.

The large number of North Korean restaurants can be attributed to North Korean military and government agencies attempting to draw in foreign currency. In Beijing, there are some 15 North Korea restaurants, all run by different agencies. And while they all serve food and have female employees perform, they have different ways of attracting customers. Some target large South Korean tour groups in major cities. Others operate in the middle of the city to draw in Chinese customers. Still others target Korean residents in China.

These overseas restaurants combined draw in annually around $10 million.

An official at the Korean Embassy in China said, “Following the South Korean warning not to frequent North Korea restaurants, even the Korean-Chinese have been avoiding them.”