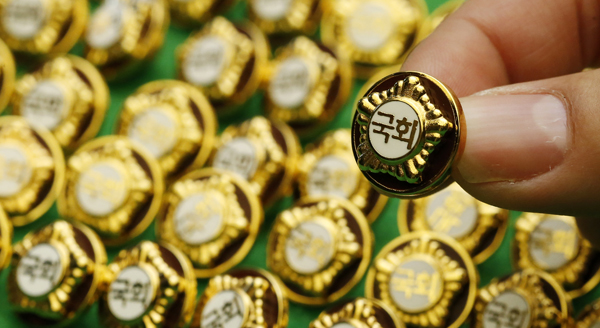 Pins to be given to newly elected lawmakers are unveiled to the media on Monday in the National Assembly. [JOINT PRESS CORPS]

In tomorrow’s general election, voters will cast two ballots: one to elect a lawmaker for their electoral district and the other for a political party. The number of second votes won by each party dictates how many proportional representatives they can name.

The latest projection shows that an increasing number of voters will split their votes: vote for one party for their district’s representative, and give the proportional representative vote to another party.

And the party that might benefit most from that is the People’s Party, founded by software tycoon-turned-politician Ahn Cheol-soo. It is increasingly absorbing supporters of the Saenuri Party, and it may end up with more proportional representatives than earlier imagined.

According to analysts, the 2016 election will be an unusually tight one. Close races are expected in 50 districts in the capital region of Seoul, Incheon and Gyeonggi.

According to a weekly survey by polling company Realmeter, the People’s Party recorded an 11.5 percent approval rating in the first week of March. That figure grew to 16.8 percent in a poll conducted in the first week of April, announced on Thursday. During the same period, the Saenuri Party’s rating dropped from 43.7 percent to 34.4 percent and the Minjoo Party’s from 28 percent to 27.3 percent.

“Of the entire voting public, 40.9 percent, or 172.1 million, are in their 40s and 50s,” said Kwon Soon-jung, head of the opinion poll department at Realmeter. “And some Saenuri supporters in those age groups turned to the People’s Party. Because the People’s Party has only about four to five candidates in the capital region who are safe enough to win, the voters will likely go along their traditional party lines to elect lawmakers for their constituencies, while they will likely vote for the People’s Party for proportional representation.”

Since the system of two ballots for one voter was introduced in 2004 general election, voters tended to vote for the same party on both ballots.

Not all analysts, however, said the new trend will make a significant difference.

“The People’s Party and Justice Party may gain one or two seats for proportional representation,” said Opinion Live’s analysis center chief Yoon Hee-woong. “It remains to be seen if the new trend of split voting will actually change the bigger picture.”

The main opposition Minjoo Party is trying exploit the new trend in its last-minute campaigning to deter an overwhelming victory by the ruling Saenuri Party. “I am appealing to supporters of the People’s Party and other opposition parties,” Moon Jae-in, former chairman of the Minjoo Party, said Sunday. “Because they don’t have much chance to win races in the capital region, please vote for [Minjoo] candidates who can defeat Saenuri competitors, while you support your parties in proportional representation voting.”

Throughout Monday, leaders of the ruling and opposition parties traveled around the country to make their final appeals to voters. Chairman Kim Moo-sung of the ruling Saenuri Party attacked the main opposition Minjoo Party for its history of forming an alliance with a pro-North Korea political party in the 2012 general election.

“In the [2012] election, the Minjoo Party formed an alliance with the Unified Progressive Party [UPP],” Kim said during a campaign rally in Busan. “That allowed 10 pro-Pyongyang lawmakers to enter the National Assembly.”

In 2014, the Constitutional Court ordered the dissolution of the UPP for its pro-North Korea stance and removed its lawmakers from the National Assembly in an unprecedented ruling after more than a year of deliberation on a Park Geun-hye administration petition to disband the third-largest political party.

Kim said the Minjoo Party and its former chairman, Moon, had never apologized for the alliance. “And I am shocked to learn that the party, once again, formed an alliance with two independent candidates, who were former UPP members, in this election,” Kim said.

While the conservative ruling party attacked the liberal opposition party for its ties with leftists, Kim Chong-in, head of the Minjoo Party, made a rare move of linking Wednesday’s general election outcome to the next presidential race. He issued a statement asking voters to allow the party to stop another majority victory of the ruling party and give the Minjoo Party power to win the next presidential election.

In his statement, Kim made an unusual move by naming the party’s presidential contenders and promising that the party will prepare them to win the next presidency. Former Chairman Moon, Seoul Mayor Park Won-soon, senior politicians Sohn Hak-kyu and Kim Boo-kyum, as well as South Chungcheong Gov. Ahn Hee-jung and Seongnam Mayor Lee Jae-myung, were named by Kim as potential presidential runners.

People’s Party leader Ahn implored voters to bring change to the established two-party system. “Because the National Assembly is divided by two major parties, they just fight each other and no economic issues are resolved,” Ahn said Monday. “When the legislature has three parties, the economic problems will be resolved.”

For the past five days, Ahn focused his campaign activities in the capital region. On Sunday, Ahn said the party is expecting a “surprise outcome” in tomorrow’s election.

Ahn also issued a statement to voters on Monday saying that the Saenuri Party and Minjoo Party had many opportunities but failed. “Please give the People’s Party a chance,” Ahn said.

The Justice Party’s co-chairman for the campaign, Cheon Ho-seon, said the party is doing its best to present feasible pledges to appeal to the voters.

“It is not easy to talk about policies and pledges at the end of the campaign period,” Cheon said. “But we want to provide grounds for the voters to make a good judgment.”