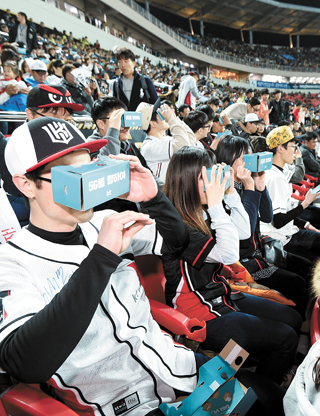 This is good news for fans like Lee Sang-won, an avid Wiz supporter who couldn’t attend the April 5 game against the Samsung Lions because he had to work. But thanks to the “Wizzap” application on his phone and a VR headset, Lee was able to watch the game live and - unlike with traditional streams - from multiple angles.

Even fans at the stadium can take advantage of the service to watch the game from different perspectives. This was helpful for Lee Hyuk-jin, who went to April 5 game against the Doosan Bears. Although he chose a spot by the outfield for his kids, he was able to catch every detail of the game through the VR broadcast, including batting practice and the performances of cheerleaders staged near the infield.

The system offers a 360-degree view of the stadium. Cameras are installed behind the home plate, next to the home team dugout and the away team dugout. Each location is equipped with five cameras, which are able to capture the grounds and bleachers without any blind spots. The video is transmitted to a broadcasting van outside the stadium, and then to Wiz fans around the world.

The Wiz hopes the initiative will serve as a global marketing strategy to promote the franchise and an opportunity to provide fans more opportunities to enjoy baseball more generally.

“KT Corporation is at the forefront of Information and Communications Technology (ICT) in Korea and we hope to live up to that status by providing fans with more cutting-edge and advanced services,” said KT sports CEO Kim Jun-kyo

And it looks like the Wiz is also determined to provide fans with games worthy of the high-tech streams.

To everyone’s surprise, the Wiz, which is in its second year in the KBO, has been able to stay near the top of the league standings since the season began, and even topped the list by one point last week.

A particular surprise came during the April 5 game, when the Wiz defeated the Korean Series favorite Lions in its season opener.

The successes are good news to the team’s management, which said before the season began that the team would do its best to finish out of the bottom pool this year.