Korea in Group A for qualifiers

Korea in Group A for qualifiers 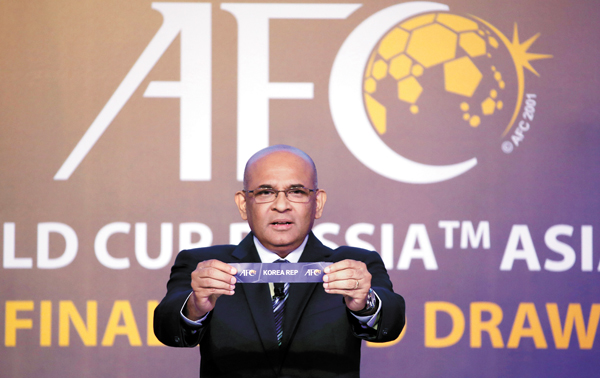 The draw for the 2018 Russia World Cup Asian qualifiers took place yesterday at the Mandarin Oriental in Kuala Lumpur, Malaysia. South Korea, ranked 56th in the world, was allocated into Group A along with Iran (World No. 42), Uzbekistan (66), China (81), Qatar (83) and Syria (110).

With the Asian Football Confederation (AFC) hosting the event, 12 teams from Asia were drawn into two groups of six. Seeding for the draw was based on latest FIFA rankings.

Saudi Arabia, Australia, Qatar, Iran, Japan, Thailand, South Korea and Uzbekistan qualified for the draw as group winners in the second round of the Asian qualifiers, while Iraq, Syria, UAE and China were added as the top second-placed teams. 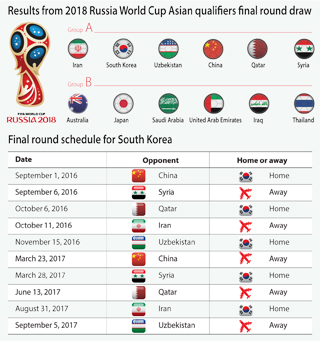 The teams will play in a round-robin tournament, in which each team plays all others in the group in turn. The winners and runner-ups in each group, or four teams in total, will qualify for the World Cup after the round.

Teams that place third will get a final chance to qualify in the 2018 FIFA World Cup Russia Asian Play-off Round. The winner from this round will then compete for World Cup spot with the team that places fourth in the Confederation of North, Central American and Caribbean Association Football (Concacaf) qualifiers.

It is difficult to predict how the final round will go for South Korea.

But according to national team manager Uli Stielike, who was present for the draw, the grouping won’t make much of a difference.

“We could think that being allocated in the Group A might give us a better chance than Group B, but I don’t think [it] matters,”

Stielike said. “What matters is that we play our best no matter where we are.”