Park’s first homer for the Twins is a knockout

Park’s first homer for the Twins is a knockout

Although the odds were against Minnesota Twins’ Park Byung-ho, his first home run demonstrated that the South Korean slugger can knock one out of the park even in the most hostile conditions.

Park blasted off his first Major League Baseball (MLB) home run on April 9 against the Kansas City Royals in an away game at Kauffman Stadium.

His homer came in the eighth inning, when the game was tied 2-2, off a 76-mile-per-hour slider by Royals setup man Joakim Soria. The ball went over the left fence of the stadium.

Kauffman Stadium is notorious for being unfavorable for hitters when it comes to hitting homers.

The venue was ranked 25th out of 30 major league stadiums in terms of MLB Park Factor, a metric of how easy it is to hit a homer at any given stadium.

If the Park Factor is higher than 1.000, the stadium favors hitters. If it is lower than 1.000, it favors pitchers. Kauffman Stadium’s Park Factor was .793, making it particularly unfavorable for hitters. But Park was able to overcome the conditions with his trademark power. 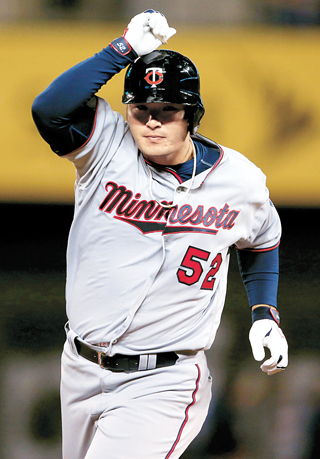 Park’s home run was particularly noteworthy for its true distance.

According to the ESPN Home Run Tracker, the ball travelled 134.4 meters (441 feet). It is ranked 15th in true distance among all MLB home runs so far this season.

It’s also the farthest for rookie this season, topping that of Colorado Rockies’ Trevor Story, who has slammed six homers in the first four games of this season, at 132.9 meters.

The apex of Park’s homer was also impressive at 39 meters.

The Major League homer with the highest apex this season was set by Miami Marlins’ Giancarlo Stanton at 44.5 meters. But his true distance was an unimpressive 124.7 meters. There are nine home runs in the MLB so far this season with apexes exceeding 39 meters, and Park’s homer had the farthest true distance among them.

Park’s homer also had both a good launch angle.

Normally, line drives with a launch angle between five and 20 degrees are considered the best hits. To maximize true distance, the launch angle should be around 35 degrees.

But at this angle, the ball often ends up as a simple fly ball. Park’s launch angle during the April 9 home run was around 30.7 degrees, the most ideal launch angle for sluggers such as Park.

Much of the information about Park’s hit came from a radar system called Trackman set up at all major league stadiums, which measures things like the angle and velocity of a hit.

Park’s first MLB home run would’ve gone over the fence in all 30 stadiums in the MLB, even the 11.28 meter high fence at Fenway Park, home of the Boston Red Sox.

“I heard about Park’s physical prowess over the winter and it was real,” Yost said.