What the relief mission is all about

What the relief mission is all about 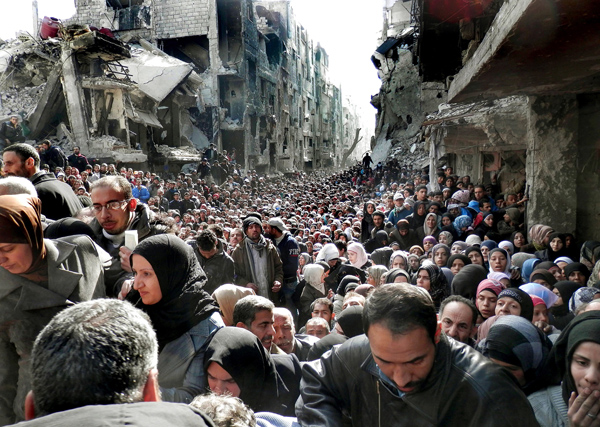 Residents of the besieged Palestinian camp of Yarmouk in Damascus, Syira, wait in line to receive food supplies in January 2014. [AP/NEWSIS]

Who would have known that I would benefit so much from a television drama? The recently popular “Descendants of the Sun” may be the first drama that have I watched repeatedly since “Jewel in the Palace” (2003-04). As a teacher of international relief activities, I found the vivid depiction of earthquake relief work just as interesting as romantic. It is surely the best audiovisual material for the students in my class.

Students ask if the drama reflects reality. Of course, some things are true, some somewhat true and some simply wrong, because this is a drama, not a documentary. However, it accurately depicts key situations in relief scenes, as it is based on the stories of people in Doctors Without Borders. I would like to talk about the relief efforts seen through “Descendants of the Sun.”

In the show, the Taebaek Unit is dispatched to the fictional country of Uruk, a typical conflict area with land mines and arms dealers. The region is also hit by an earthquake. This is called a complex disaster, where a war and natural disaster are combined. Relief work for a natural disaster is relatively simple. All the means and capacity of the country would be mobilized for its restoration, and if the country could not handle the damage, it would ask for external help, and the United Nations and international nongovernmental organizations would offer humanitarian assistance.

However, it gets more complicated as a civil war breaks out in Uruk. Government forces, rebels and other power groups pursue their own interests, and the relief workers often don’t get access to the disaster scene. In many cases, gangs, such as Argus in the story, would have relationships with local strongmen, and helping them could harm local residents. So the first rule of relief work is “do no harm.”

In the case of an earthquake, it is very rare that the medical services team and engineer elements would come to help immediately. In other words, the local people need to handle the damage immediately after the disaster strikes. They need to find the survivors in the rubble, care for the injured, find the bodies and secure food and water. Help from the international community would arrive two, three days later at the earliest. How can someone survive for two or three days in a crumbled building? International relief workers may have advanced technology and equipment, but the chances of mission success, or rescue of the survivors, is quite poor.

So it is important that local residents of areas frequently struck by natural disasters are trained to predict and prepare for disasters. In hospitals, disease prevention is just as important as providing emergency medical services. Studies show that every dollar invested on disaster prevention could save five to 10 dollars in disaster response costs.

International relief teams provide water, food, medicine, shelter, protection and safety when the government requests them, and the measles episode in the drama was very realistic. The four major causes of death in children under 5 are acute respiratory illnesses, diarrhea, malaria and measles. The refugee camps, where tens of thousands of people live together, are almost always struck by measles outbreaks.

I worked at a Syrian refugee camp in southern Turkey last year, and more than 10 children I had played with died of the disease. Every year, these four diseases kill millions of people, when they could be prevented with mosquito nets, clean water and vaccines. They are simple and inexpensive to prevent, as long as we have the will to prevent them.

Land mines are also serious problems in countries that have had long wars. Not everyone is as lucky or skilled to escape from the minefield as the heroes in the drama did. Many locals step on land mines, and even when they survive, they often lose limbs. There are at least 10 million land mines worldwide, and it would take 1,000 years to remove them all. It costs five to 10 dollars to produce and bury a land mine, while removal costs as much as $1,000. The demilitarized zone in the Korean Peninsula is the area with the highest density of land mines in the world. It is frightening. We have to stop the madness of producing and burying land mines.

In disaster areas, fellow workers develop a strong bond. So the romance in the drama was also very realistic to me. In fact, many relief workers find their soulmates while working in the field. I’ve seen such cases in Iraq, South Sudan and Mali. I would have to go to more fields to meet my match.


*The author, an international relief worker, is president of the School of Global Citizenship.