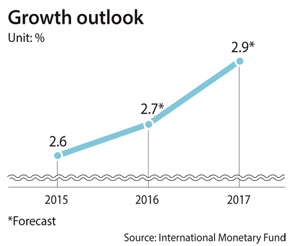 On Tuesday, the IMF predicted Korea’s economy will expand 2.7 percent this year, a substantial drop from the 3.2 percent cited in its last outlook in October.

The IMF said it lowered its projection for Korea’s economy largely due to sluggish growth in emerging markets including China.
The institution also readjusted its growth outlook for the global economy from 3.4 percent in January to 3.2 percent.
Several investment banks have raised concerns about growth in the Chinese economy and lowered their projections for this year to the mid-6 percent range. Some even think Chinese growth could fall to the 5 percent range, citing excessive corporate debt and a rapidly aging society as negative factors.

Those projections are far below Beijing’s own target range of 6.5 to 7 percent. The Chinese government will announce its first-quarter growth report on April 15, which many are expecting to be 6.7 percent.

If so, this would be the worst growth the economy has seen since the first quarter of 2009, when it increased 6.2 percent.

“Korea’s exports to China account for 25 percent of all exports, and exports make up roughly 50 percent of the nation’s gross domestic product,” said Ju Won, a senior researcher at Hyundai Research Institute. “Therefore, the impact that follows from China’s economic growth inevitably is bigger [when compared to other global economies.]”

In a study of eight countries — Singapore, Indonesia, Germany, Russia, Australia, South Africa, Japan and the U.S. — Korea was the third country to suffer the most when the Chinese economy declined 1 percentage point.

The Asian Development Bank readjusted its growth outlook for the Korean economy from 3.3 percent to 2.6 percent recently. Bank of Korea Gov. Lee Ju-yeol recently raised questions over the possibility of 3 percent growth.

But Korea’s Finance Ministry continues to stress that a 3.1 percent expansion is doable, citing recent positive signs including improving consumer sentiment and spending.