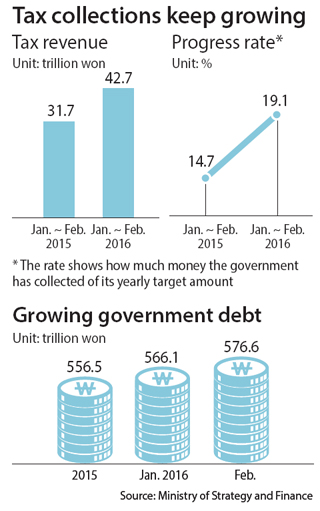 Although the local economy struggles with a steady decline in exports, the government collected more taxes in the first two months of the year compared to the same period a year ago, largely thanks to its moves to boost consumption.

The government’s collection of value-added tax charged on purchases of goods and services was a major contributor.

According to the Ministry of Strategy and Finance on Tuesday, the government collected 42.7 trillion won ($37.3 billion) in tax revenue as of the end of February, a 10.9 trillion won or 34 percent increase year on year. The tax collected in the first two months of this year accounted for 19.1 percent of the government’s 2016 target of 222.9 trillion won. This is a 4.4 percentage point increase compared to the rate a year ago.

The government said it collected 13.9 trillion won in income tax, 2.8 trillion won or 25 percent more than a year ago. An active real estate market helped boost the income of people who sold residences. Income tax is the largest component of tax revenue.

This was largely because the government cut the individual consumption tax levied on numerous luxury goods including automobiles to encourage spending. The tax cut actually ended at the end of last year, but the government revived it.

Government debt fell to 576.5 trillion won as of the end of February, down 3.6 percent from 556.6 trillion won last year.