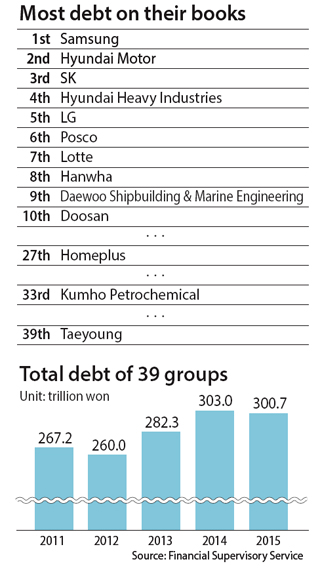 Thirty-nine businesses have been listed as most heavily indebted by the nation’s financial watchdog on Tuesday, facing tighter monitoring by their creditors and authorities.

According to an announcement by the Financial Supervisory Service (FSS), the debt threshold for the groups was an excess of 1.35 trillion won ($1.18 billion) as of the end of 2015.

The announcement was made as concern is rising about the risks of corporate debt and the need for pre-emptive restructuring of indebted firms that are expected to impact the country’s economic recovery.

“Amid the toughening economic reality, pre-emptive efforts should be made to prevent corporate defaults and restructuring for efficient resource distribution,” Zhin said. “Please take swift action for companies that are considered viable.”

Homeplus’ debt grew last year because MBK Partners, the retailer’s new owner, financed the purchase based on a leveraged buyout that took the retailer’s assets as collateral.

Kumho Petrochemical was put on the list as it was spun off from Kumho Asiana Group last year.

Taeyoung entered the list as the least indebted, with its loans only slightly increased from a year earlier.

The three entrants will be monitored by creditor banks. Kookmin Bank will take care of Homeplus, while KEB Hana Bank will oversee Taeyoung. Korea Development Bank will be responsible for Kumho Petrochemical.

The aggregate debt of the 39 groups stood at 300.7 trillion won as of 2015, down 0.8 percent from a year earlier. The main debtor groups account for 15.5 percent of the total credit loans issued by financial institutions to local businesses at 1,939.1 trillion won, which soared 7.1 percent over the same period. The total figure grew due to increased loan issuances by insurance companies, FSS data showed.

According to the FSS’s supervisory rule on the banking sector, the watchdog every year names business groups holding debt that is higher than 0.075 percent of the nation’s total outstanding credit from financial institutions as major debtors.

The total debt of the top five groups, including SK, Hyundai Heavy Industries and LG, stood at 124.3 trillion won, the data showed.

Creditors will conduct assessments of the financial structures of the debtors by May, the FSS said. Those with fragile structures will need to discuss with their creditors measures to make improvements.