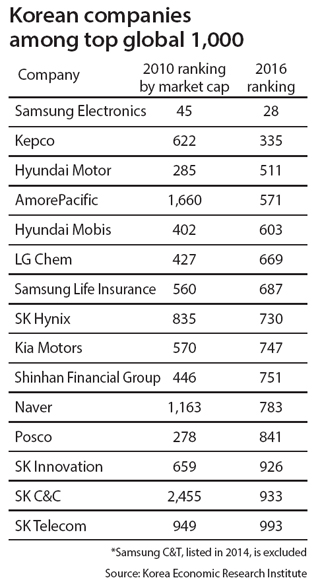 Korea’s major companies are suffering from shrinking market capitalizations, according to research from a local think tank, triggering concerns over their futures.

As of the end of March, 16 Korean companies were listed on the top 1,000 corporations around the world in terms of market cap, a study by the private Korea Economic Research Institute said. Of those 16, only six had entered the top 1,000 list or moved up in rank between 2010 and 2016.

Samsung Electronics, Korea’s most valuable company, saw its rank leap from 45 to 28 over the six-year period; Korea Electric Power Corporation jumped from 622 to 335; and SK Hynix from 835 to 730. Companies that became members of the top 1,000 company club include AmorePacific, Naver and SK C&C. AmorePacific leapfrogged from 1,660 to 571 in just six years as Korea’s No. 1 cosmetics producer became popular in China and other key foreign markets on the back of the hallyu, or Korean wave of cultural content.

But nine Korean companies fell in rank over time. Top automaker Hyundai Motor slumped from 285 in 2010 to 511 in March of this year and top steel producer Posco nosedived from 278 to 841. Others include Kia Motors, Hyundai Mobis, SK Innovation, SK Telecom, LG Chem, Samsung Life Insurance and Shinhan Financial Group.

“Korea’s leading companies are having seeing sales declines in the domestic as well as overseas markets and it’s hard to expect the kind of rapid growth observed at Naver and AmorePacific in the past,” said Kim Yoon-kyung, a researcher at the KERI. “If the current pace continues, it’s feared that Korean corporations will inevitably fall behind in the global arena.”

She pointed out a flaw in the widespread perception that conglomerates benefited from the economic revitalization measures introduced by the government. Instead, both their revenues and market caps have either grown more slowly or declined.

“Market cap may fluctuate depending on the financial market situation,” Kim said, “but continued earnings reduction could deal a harsh blow to the Korean economy from a long-term perspective.”