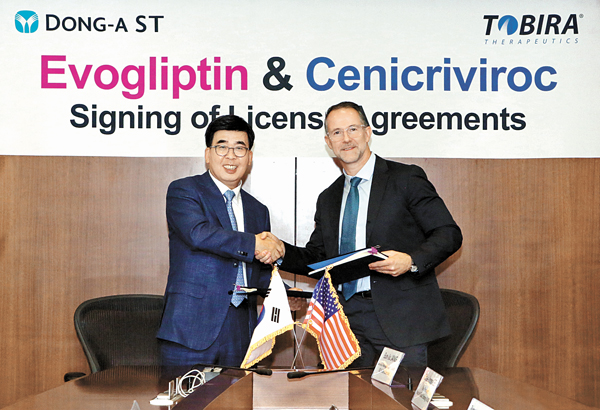 Local drug maker Dong-A ST has inked a licensing agreement with U.S. pharmaceutical company Tobira Therapeutics to further develop its treatments for diseases of the liver and sell them overseas.

The $61.5 million deal was signed at Dong-A ST’s headquarters in Dongdaemun District, central Seoul, on Monday. Payment will be given gradually as certain sales and development goals are met.

The deal involves evogliptin, a treatment for diabetes independently developed by Dong-A ST, which was already released domestically last month under the name Suganon.

With the new agreement, Tobira will further develop evogliptin to also cure nonalcoholic steatohepatitis. Tobira has its own drug under development for the same disease, Cenicriviroc, and the company will try and add evogliptin to make a new drug out of the compound. It will also try to create a new product solely from evogliptin.

Once the new product is readied, it will be distributed to markets in the United States, Canada, Europe and Australia through Tobira.

Nonalcoholic steatohepatitis is closely related to obesity, hyperlipidemia and diabetes, which can all lead to liver-related diseases. Between 2 and 4 percent of the world suffer from the disease, including 3 to 5 percent of all Americans. There has been no approved cure for the disease so far.

“We think this is a good opportunity for [evogliptin] to be used in the treatment of other diseases, and the partnership with Tobira will be a stepping stone for us to enter global markets,” said Kang Soo-hyoung, president of Dong-A ST.

According to a report released by Deutsche Bank, the market for treating the disease could be worth 35 trillion won ($31 billion) by 2025.