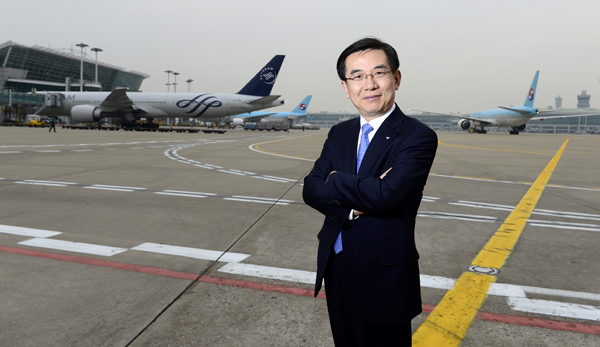 Chung Il-young, the new CEO of Incheon International Airport, emphasizes that talking to employees and keeping abreast of all airport activity are essential to his job. [CHUN MIN-KYU]

Chung Il-young, the new CEO of Incheon International Airport, wants to build the global airport’s image into that of a one-stop cultural platform rather than merely a place where people board planes.

He plans to open a branch of the famous K-pop agency JYP Entertainment office, as well as a 24-hour cosmetic surgery clinic, which would save cosmetic surgery tourists the hour-long trip to Gangnam District, Seoul.

The award-winning airport suffered a rough time earlier this year, due to its baggage crisis and an illegal entry case, but Chung is working more than ever to rebuild its reputation. He called an emergency management meeting when he took office and has come to work every day since then, arriving at 5 a.m. Among the airports new improvements are four mobile check-in zones, due later this year, where passengers will be able use tablets to check-in without having to wait in lines. By 2020, there will be eight zones such zones.

In an interview with the JoongAng Ilbo, held at his office on Friday, Chung showed up in a formal suit but was wearing a pair of hiking shoes. He said he had just come back from checking the construction site for the airport’s second terminal.

Q. Don’t you think hiking shoes are an ill-fit when wearing a full suit?

A. It takes more than 5 kilometers (3.1 miles) to walk around the main terminal. I don’t think I could do it with dress shoes.

Is there a specific reason you spend so much time on-site?

Employees’ attitudes change when the CEO walks around the corner. I found out that many departing passengers arrive at the check-in areas around 6 a.m., and I asked airlines and Ministry of Justice to start the day 30 minutes earlier accordingly. It only took me two months to finish restructuring and I have already come up with numerous plans to improve our competitiveness.

How is the airport going to change from now on?

It will become a smart airport using various kinds of information and communications technology (ICT). We will have unmanned baggage check-in counters, self-check-in kiosks and automatic immigration customs services available. Passengers can now get all the way to security without having to talk to anyone.

Q. Do you think Korea’s competitiveness is very high since we are strong in the ICT industry?

A. ICT will have a huge impact on airports from now on and I do believe Korea has advantages. The second terminal will finally be built next year and it will allow us to shorten the immigration process from 40 minutes to 10 minutes. No airport in the world can match this speed.

Is it really possible to do it in 10 minutes?

We will use resident registration data so that passengers, who didn’t apply for the automatic immigration process ahead of time, can enjoy this service by October. More than 70 percent of passengers will be able to use automatic ones by the end of this year. Once the second terminal is finally built, there will be more security checking equipment, so I am sure 10 minutes will be enough.

Do you think other airports will be able to catch up with Incheon Airport?

Incheon won the annual Airport Service Quality surveys conducted by the Airports Council International for 11 consecutive years. However, we are only ahead of Singapore’s Changi Airport, which is in second place, by 0.004 percentage points. Qingdao Liuting International Airport, which is only an hour from Incheon, is also planning to build its new airport and is expanding the number of direct flights to foreign countries. We can’t be relaxed at all.

What are some of your plans to make the Incheon unique?

I plan to make the airport into a cultural platform rather than just a place where people board planes. Foreigners enjoy visiting JYP Entertainment’s building, located in Cheongdam-dong, and I plan to have one of its studios moved into the Airport. So, Incheon will become Cheongdam-dong No. 2. Additionally, many come to Korea for cosmetic surgery, and I am thinking about opening a 24-hour plastic surgery clinic in the airport.