Today’s general election of 300 lawmakers for the 20th National Assembly is considered a vital test for presidential hopefuls in the three main political parties.The outcome will determine the political paths of the Saenuri Party’s Kim Moo-sung, the Minjoo Party’s Moon Jae-in and the People’s Party’s Ahn Cheol-soo in the months leading up to the December 2017 presidential election.

For the Saenuri Party, winning a majority is a must.

“If supporters of the Saenuri Party do not cast ballots, we won’t be able to win the majority, and it will be a serious crisis for the party,” Chairman Kim Moo-sung said on Tuesday.

If the party wins less than 150 seats, it will be considered Kim’s defeat and his path to a presidential nomination will be shaken.

“Although Kim declared that he would end the top-down nomination practice in the party, he failed to stop the loyalists of President Park Geun-hye from influencing the nomination process,” a party official said. “If the Saenuri Party loses its majority, it will hold Kim accountable for conflict during the nomination period. His status as a presidential contender will be greatly damaged.”

“Park’s loyalists are trying to push Kim out, while adversaries of the president are trying to protect him,” said a senior lawmaker of the party. “We may face a big bang. The party may be divided.”

If the Saenuri Party wins between 150 and 160 seats, it will be considered a break-even point for Kim. Before the nomination fracas earlier this year, the party occupied 157 seats. It lost its majority on the floor after 11 lawmakers abandoned the party because they were denied nominations.

Party officials said confrontation between Park loyalists and Kim supporters may erupt in May, when the party elects a floor leader. Tensions are expected to peak in July, when it elects a new leadership, including the chairman.

The factional strife is expected to deepen if politicians who left the party try to return after election victories.

“If Kim’s allies manage to enter the National Assembly, the Kim faction can be created,” a party official said.

For Moon Jae-in, the former chairman of the Minjoo Party who suffered a narrow defeat to Park in the 2012 presidential election, today’s polls are the biggest trial of his political life. On Friday, Moon said he would retire from politics if voters in the Honam region withdraw their support for him. Honam is composed of Gwangju as well as North and South Jeolla provinces. It is a traditional stronghold of the main opposition party, but Ahn Cheol-soo’s breakaway People’s Party has became popular there. 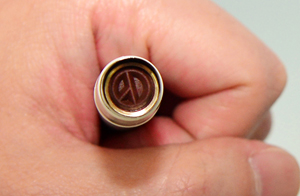 An official from the National Election Commission checks the seal for voting at a ballot booth in Seoul on Tuesday. [NEWSIS]

Although Moon did not specifically say what kind of defeat would force him to retire, party officials said 100 seats would be the standard.

“If the Minjoo Party wins 80 or 90 seats, Moon will apologize and retire,” a key Moon ally said. “His aides think 100 is the minimum, but only Moon knows the answer. It is clear that Moon thinks he has no chance in the presidential election if he fails to win Honam.”

Winning 100 seats will be a challenge. “We are safe in 60 districts, but 100 is hard,” Jung Jang-sun, the Minjoo Party’s chief campaign planner, said in a media interview.

Moon is suggesting Honam voters express their support for the People’s Party on their second ballot for proportional representation, but to vote for Minjoo Party candidates for their electoral district.

“Even if the Minjoo Party wins more than 100 seats, Moon will face a crisis if the party fails to keep the ruling party from winning a majority,” said Yoo Sung-jin, a professor of political science at Ewha Womans University. “Winning 120 seats - enough to stop the Saenuri Party from winning the majority - will secure Moon’s presidential bid.”

Ahn, a software tycoon-turned-lawmaker and founder of the People’s Party, wants to upend the country’s two-party system by winning more than 30 seats, including 20 district lawmakers, to become the third-largest party in the legislature.

Even if the Saenuri Party wins a majority, Ahn’s party will become an important force if it secures more than 30 seats. The current National Assembly Act requires 180 votes to designate a contentious bill a fast-track deliberation item.

If the People’s Party wins less than 20 seats, it won’t be able to form a negotiation bloc, which has the right to send a representative to legislative negotiations. In that case, the party will likely face a crisis.

Opinion polls conducted over recent weeks have predicted that Ahn’s party will win about 30 seats, and political analysts say how well it does around the country is the thing that matters. If the party wins largely Honam districts, it will be reduced to a provincial party.

Reflecting those concerns, Ahn concentrated his campaign activities in the capital region since Friday and vowed to build a national party. “Winning four to five seats in the capital districts is our strategic goal,” Lee Tae-gyu, the strategy director of the People’s Party, told the JoongAng Ilbo.

The People’s Party also has to worry about a strong performance creating a backlash among liberals, especially if the Minjoo Party wins less than 100 seats.

“The traditional opposition supporters including the Minjoo Party could pressure Ahn to take responsibility for the split among liberal voters,” said Kwon Soon-jung, head of the opinion poll department at Realmeter.

Han Jeong-hun, a political science professor at Seoul National University, said the People’s Party has a chance at becoming an opposition power if it wins up to five seats in the capital region and garners more than 20 percent of proportional representation votes.

“In the presidential campaign, it can lead the restructuring of the political landscape by joining forces with defectors from the Saenuri Party and Minjoo Party,” he said.