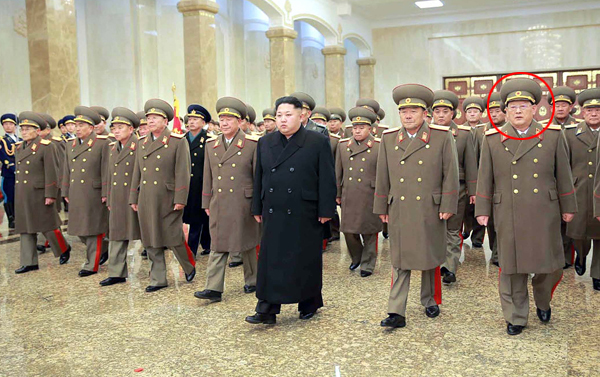 Kim Won-hong, circled, the North Korean minister of state security, along with North Korean leader Kim Jong-un and other power elites, pays tribute to the mausoleum of the late Kim Jong-il on Dec. 17, 2015, to mark the fourth anniversary of Kim’s death. [JOONGANG PHOTO]

As news emerges that the figure who led 12 North Korean restaurant employees to defect en masse was in fact a state security official, analysts now wonder what will happen to Kim Wong-hong, the regime’s minister of state security.

The South Korean Ministry of Unification revealed on Friday that a group of North Koreans, one male manager and 12 of his female employees, who worked at one of Pyongyang’s state-run overseas restaurants, defected to the South on Thursday.

“North Koreans who reside long-term in a foreign country are always regulated by a state security official,” the South Korean government official said. “Though he held the title of ‘manager,’ he would have held onto the employees’ passports and monitored their every move. So what we have here is a case where the very security official who should have been keeping tabs on them was the person who organized their escape.”

The 13 North Koreans were employed at a restaurant called Ryugyong, in the eastern Chinese port city of Ningbo. Their decision to defect came as a result of their growing disillusionment with the North Korean regime as well as the increased difficulty they knew they would face running their business after the recent sanctions against Pyongyang.

“Among North Koreans, State Security Ministry officials have the highest level of loyalty to the ruling party,” the official continued. “This is doubly true of state security officials who are dispatched to work overseas, as they undergo several rounds of examination to make sure they have no inclination to defect, and other authorities stand as guarantors for them. So this defection surely sent ripples throughout the ministry.”

Kim Won-hong, the North Korean minister of state security, has been named by South Korean officials and analysts as a person of great influence under the Kim Jong-un regime.

Kim Yong-ho, a North Korean foreign policy professor at Yonsei University, said, “This case shows that no matter how strong the state security official’s sense of loyalty is, if they don’t make their sales targets, defecting from the regime is inevitable.”

A high-ranking North Korean defector who requested anonymity said, “If the fact of the defection en masse did not become widely known, the State Security Ministry could have covered it up within it the ministry and not reported it to Kim Jong-un.” But, he added, North Korean leader Kim Jong-un would already know of this event because he closely monitors South Korean media and has a tendency to respond sensitively to North-related reports. “Thus, he may make Kim Won-hong take some sort of responsibility.”

There is also speculation that Gen. Kim Yong-chol, the North Korean Workers’ Party secretary in charge of South Korea affairs, will also be reprimanded.