Kerry says U.S. is open to peace treaty with North

Kerry says U.S. is open to peace treaty with North 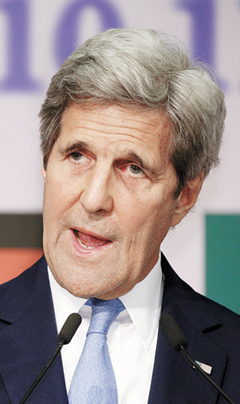 Following the implementation of tough sanctions on Pyongyang, U.S. Secretary of State John Kerry said in a press conference in Japan on Monday that Washington is prepared to negotiate a peace treaty with North Korea.

“We are prepared to get back to talks,” Kerry said during a historic trip to Hiroshima, the site of the first atomic weapons attack. “We have made it clear that we are prepared to negotiate a peace treaty on the peninsula.”

Kerry, who was in Hiroshima to attend a Group of 7 foreign ministers’ meeting, said the United States can “ratchet up” pressure on North Korea, but depending on its actions, it is also “prepared to negotiate a nonaggression agreement” as well as “provide economic assistance” to the regime.

His remarks signaled a route for Pyongyang to return to the dialogue table since the adoption of the toughest-ever UN Security Council resolution last month to punish North Korea’s continued nuclear and missile tests. Individual countries have also levied sanctions on the North.

Analysts are waiting to see if Kerry will make contact with North Korean Foreign Minister Ri Su-yong in New York next week at a ceremony to sign a landmark United Nations climate change agreement.

In February, Kerry declared that the United States was open to negotiations to draw up a peace pact to officially end the 1950-53 Korean War. The conflict concluded with an armistice agreement. Pyongyang has consistently pushed for negotiations with Washington over a peace treaty.

On Feb. 23, Kerry said in a joint press conference with Chinese Foreign Minister Wang Yi in Washington, after coming to an agreement on the Security Council sanctions, that North Korea “can actually ultimately have a peace agreement with the United States of America… if it will come to the table and negotiate the denuclearization.”

Wang has been pushing a policy to move forward with the denuclearization of North Korea in tandem with transitioning from an armistice to a peace treaty.

“Secretary Kerry is justifiably proud of the cause that he championed in negotiating a deal with Iran that has closed a clear and present danger of Iranian nuclearization,” a senior U.S. State Department official said to reporters in Japan on Monday, “and he has been relentless in his effort to find a way through the impasse caused by North Korea’s categorical refusal similarly to negotiate an agreement.”

Washington officials have referred to the landmark U.S.-led nuclear deal with Iran that was sealed last July as possibly serving as an example for efforts to denuclearize North Korea.

The official pointed out that it is a “matter of time before reality catches up with North Korea” and said that “part of that reality is the continued willingness of the United States and the other partners in the six-party talks to honor the undertakings that we made back in 2005 to normalize relations, to provide negative security assurances, to work on peace arrangements, to provide economic assistance.”

The six-party talks, a negotiation platform with China, Japan, Russia, the United States and the two Koreas, was originally formed with the aim of convincing Pyongyang to abandon its nuclear weapons program but has been stalled since 2008, when North Korea walked out.

There is also interest to see if Ri will meet with UN Secretary General Ban Ki-moon, who has said he wants to visit Pyongyang. In the past, Ban has met with the foreign minister on the sidelines of United Nations meetings.

The South Korean Ministry of Foreign Affairs emphasized Tuesday that Seoul and Washington share the position that any dialogue with North Korea should prioritize denuclearization.