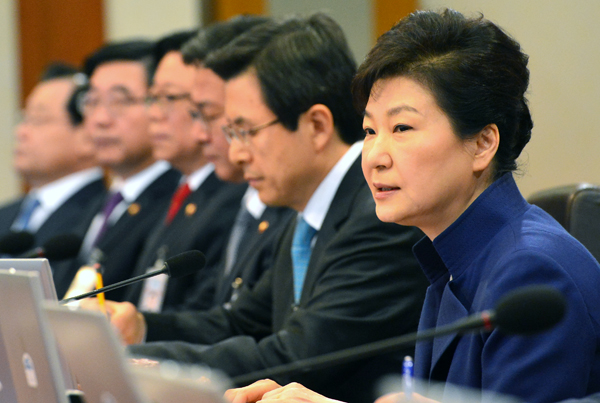 President Park Geun-hye attacked lawmakers of the 19th National Assembly for having neglected economic bills, asking voters to likewise condemn them, as she issued a lengthy message concerning domestic politics on the eve of the legislative election.

Park hosted the cabinet meeting on Tuesday morning at the Blue House, where she talked about the general election for the 20th National Assembly, scheduled to take place today.

“Because of my grave sense of responsibility,” she said, “my heart and body feel heavy and I have many sleepless nights. Cabinet members must also work with a greater sense of responsibility and duty. I hope that the 20th National Assembly will truly represent the will of the people by serving them with all their hearts.”

In her opening remarks, Park also talked about the growing security threats coming from the North.

“I hope the people will show faith in the government and unite behind it,” Park said.

The timing of her remarks did not go unnoticed by opposition parties, who criticized the president for trying to influence the election.

“Park’s remarks are an overt threat to voters, telling them they must vote for ruling party candidates,” said Kim Sung-soo, spokesman of the main opposition Minjoo Party. “This is the worst-ever election intervention, unprecedented in previous governments.”

The People’s Party also expressed its disappointment with Park’s decision to blame the National Assembly for the economic crisis on the eve of the general election.

“Park’s poor perception of the situation and lack of responsibility can be seen in her remarks. In a democracy, no legislature creates a law precisely as the president dictates it should.”

It also said the people will pass judgement on Park for her economic failure, adding, “The president must pay attention to state affairs, not the general election.”

Han Chang-min, spokesman of the Justice Party, was also critical of Park’s remarks.

“It sounded like an appeal to the voters to fill the new legislature with Park loyalists,” he said.

The Minjoo Party also denounced the Blue House for trying to manipulate voters by ordering that the Unification Ministry announce the mass defection of 13 North Korean restaurant workers on Friday, and confirm the defection of a senior colonel of the North’s General Reconnaissance Bureau last year.

“If the Blue House is making public the entries of defectors, one after another, hoping to win an election at the cost of protecting these people and their families, this is lamentable,” Kim, the Minjoo spokesman, said.

The ruling Saenuri Party was quick to reply.

“It appears the Minjoo Party is talking about the North Korea issue because it is stricken with victim mentality,” said Ahn Hyoung-hwan, spokesman of the Saenuri campaign. “This is in line with their traditional tactic of trying to cast suspicion on the government and the ruling party in order to get ahead in the election.”