Penalty kicks galore in the Classic

Penalty kicks galore in the Classic 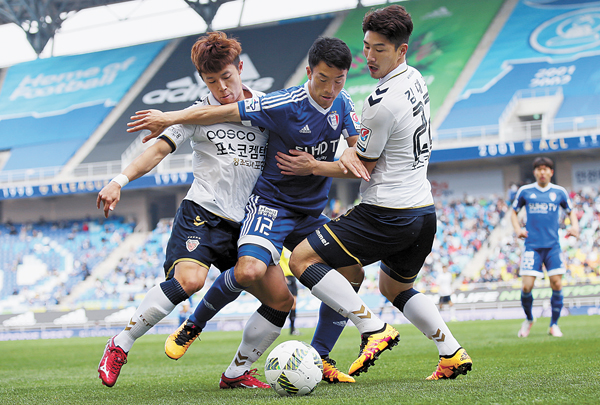 During yesterday’s elections, South Korean football fans were able to check out matches on their day off as all 12 teams from the K-League Classic played.

At the end of the day, the keywords for the fifth round of matches were “penalty kick.”

Three out of the six games yesterday saw one penalty kick each. The first penalty kick came during the game between FC Seoul and Gwangju FC. After Seoul took the lead in the 18th minute when Park Chu-young scored his third goal of the season, Seoul’s Carlos Adriano added another in the 39th minute off a spot kick. The penalty chance came from Park’s effort, who was fouled while infiltrating Gwangju’s side of the pitch. Although Gwangju tried to even out the match by scoring in the 41st minute, Seoul kept the upper hand throughout the remainder of the match. Seoul edged Gwangju 2-1.

Another kick came during the game between the Pohang Steelers and Suwon Samsung Bluewings. With 11,600 Suwon fans attending the game, Pohang clinched the lead in the 26th minute when Moon Chang-jin crashed to the ground and secured a penalty kick after being sandwiched by Suwon’s defenders. Yang Dong-hyen completely threw off Suwon goalie No Dong-geon and scored the spot kick. However, 22-year-old Kwon Chang-hoon came to the rescue for Suwon only 10 minutes later when he smashed a one-touch shot off a pass by his teammate Baek Ji-hoon. Kwon has had one goal in each of the past four games for Suwon, including a goal in the Asian Champions League (ACL) match against Melbourne Victory FC. For Suwon, yesterday’s game was also significant as it became the first football team in Korea to host over 7 million fans in the history of its franchise.

The last spot kick appeared in the match between Suwon FC and Ulsan Hyundai Motors. Suwon’s Kim Byeong-oh was fouled inside the box in the 42nd minute after receiving a lobbed pass from the back field. Marvin Ogunjimi pushed in an easy one for Suwon to take the lead. But Ulsan’s 21-year-old forward Kim Seung-joon scored the equalizer for the team by heading in the ball deflected by Suwon’s goalkeeper in the 70th minute. Suwon and Ulsan tied the match 1-1.

While FC Seoul trailed its opponent in the fifth round of matches, yesterday was yet again a disappointment for Seoul’s rival Jeonbuk Hyundai Motors, who failed to triumph over bottom-ranked Incheon United FC in a 1-1 draw. After a scoreless first half, the championship favorite Jeonbuk was determined to force a ball behind Incheon’s net in the second half. Despite the relentless attempt, however, Jeonbuk remained silent until the 83rd minute, when Lee Dong-gook finally drove an opener. Lee received a pass inside the box and volleyed the ball in nonstop off his chest, catching Incheon’s defense off guard. This was Lee’s third consecutive goal in three games. But Incheon’s forward Song Si-woo equalized the match in the 90th minute to halt Jeonbuk from emerging victorious.

Things weren’t so different for Seongnam FC and Jeonnam Dragons, who tied the match 0-0. Although the two went scoreless, it wasn’t for lack of trying. Seongnam’s Tiago Alves Sales, who’s had four goals in the K-League Classic so far this season, and national team striker Hwang Ui-jo took a combined 12 shots, only have them deflected by Jeonnam goalie Lee Ho-seung and the team’s defensive line. Jeonnam also put pressure on its offense in order to secure a valuable win and escape the bottom pool for the K-League standings. Despite its 19 shot attempts, however, Jeonnam was unable to score.

In comparison to other teams, it was a good day of football for Jeju United FC, who breezed past Sangju Sangmu FC 4-2. The team took the lead from the get-go when Song Jin-hyung scored the first goal one minute into the game. The 21-year-old midfielder An Hyeon-beom added another goal for Jeju four minutes later. Jeju’s third goal came as soon as the half time started in the 46th minute as Moon Sang-yun had his debut goal for the club. It was a brilliant midrange shot from the top right corner of the penalty box. An added the final goal for Jeju in the 64th minute.

Sangju managed to put in two back-to-back goals in the 87th and 90th, but by the time its offense came alive, it was too late.