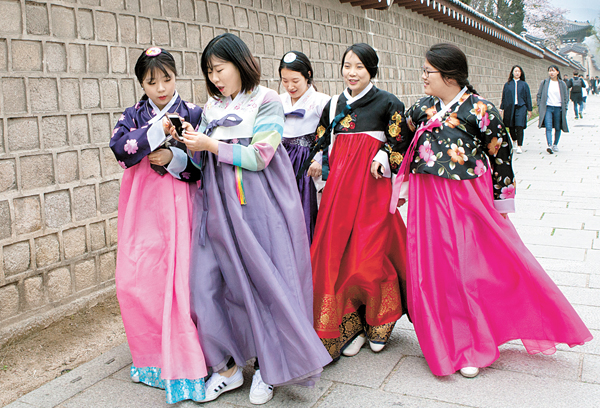 A group of women in hanbok walk along the wall of Gyeongbok Palace in central Seoul on Saturday. Wearing the traditional clothing and taking pictures has become a new trend among young people, partly because of photo-based social media. [PARK SANG-MOON]

Hanbok is traditional but not old-fashioned.

Unlike several years ago, it is not unusual today to see people strolling near Gwanghwamun Plaza, Samcheong-dong and other historic sites in central Seoul in their colorful hanbok. The fact that a considerable number of people upload pictures of themselves wearing hanbok on social media demonstrates how the traditional clothing is becoming up-to-date.

Hanbok has become rarer and rarer, even on traditional holidays. But these days, a trend has emerged in which people casually enjoy wearing hanbok as an entertaining one-day experience.

Most people borrow the clothes at rental shops where they can choose from various designs and colors. The cost varies by each shop but generally falls between 11,000 won and 16,000 won for rental of one to four hours.

“I saw a lot of my friends uploading their pictures wearing hanbok and it seemed really interesting,” said Kim Min-ji, a 14-year-old middle school student. She visited Changdeok Palace, located in central Seoul, with her friend of same age earlier this month.

“I thought hanbok could only be worn during just a few days of traditional holidays,” said Kim. “But it was interesting that it could also be worn in our daily lives.” The two girls said that they felt excited because the clothing was very beautiful.

Other groups of hanbok-wearers had similar motivations. “Before I tried it out, I saw a lot of people wearing it both offline and online,” said Seok Ye-in and Kim Hong-eun, 22, who visited Samcheong-dong the same day. They said that people didn’t look at them in surprise because the style is already in vogue.

Foreigners are also part of the trend, and a rental shop manager who wanted to remain anonymous said, “The proportion of domestic and foreign [customers] is [1:1].”

Marie Suazo, 24, from the Philippines, has lived in Korea for more than 17 years. Although she was accustomed to Korean culture before, she said that she felt she became more cultured. “We borrowed hanbok at a rental shop located near Euljiro,” she said. “One of my friends who is from Singapore enjoyed our one-day event near Gwangwhamun.” She also mentioned that a couple of her friends including exchange students try on hanbok by going to hanbok cafes. 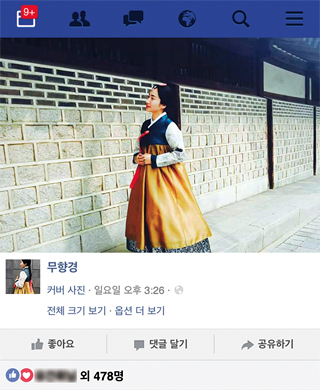 Vu Huong Quynh, a well-known blogger from Vietnam who borrowed hanbok from a rental shop, enjoys her time in Insadong, central Seoul. [SCREEN CAPTURE FROM FACEBOOK]

Vu Huong Quynh from Vietnam visited Insa-dong earlier this month accompanied by her sister and her boyfriend. It was her second time wearing hanbok after she tried on modernized hanbok last year.

“I personally believe it is a ‘must-do’ kind of thing for anyone who has been to Korea,” she said, adding, “Elder Korean people said I look decent.”

In fact, Vu is an influential blogger famous for introducing Korea’s latest trends to her Vietnamese followers. She said that she listed wearing hanbok on her “Top 10 Things to Do” in Korea, saying that her fans “cannot wait to try it!”

Origins of the trend

Social media trends seem to affect the masses. “I saw a lot of posts on social media wearing hanbok,” said a 15-year-old girl who visited Samcheong-dong with her mother, and they were both wearing hanbok. “I wore it as I saw a lot of people wear hanbok in the streets these days. My daughter suggested we try out,” said the mother, in her 50s.

According to the Hanbok Advancement Center, an affiliated organization of the Korea Craft & Design Foundation under the Ministry of Culture, Sports and Tourism, the trend grew popular last year, although the general phenomenon emerged three to four years ago in Jeonju, also known as “City of Hanbok,” in North Jeolla.

The total number of hanbok rental shops has increased roughly 10-fold nationwide during the past year, the center said.

“People started visiting our shops since spring last year, but the number drastically increased this year,” said Jeong Min-kyoung, the owner of Goeunsol Hanbok. “I think hanbok is more like a type of entertainment that can amuse people nowadays.”

“People enjoy spending time with their friends wearing the pretty clothes outside, as well as sharing their interesting experience with other people via social media,” she added. Jeon Min-jeong, who works at the Hanbok Advancement Center, explains there are two main reasons behind the trend. First, hanbok has been estranged from daily life, so people perceive the clothing as special and unique, more like a costume.

The second reason is increased awareness in hanbok. While the clothing has been considered outdated due to its use of bright primary colors old-fashioned details, new designs have emerged as an alternative. Stars such as Lee Young-ae and K-pop singer Suzy’s hanbok pictorials have also drawn attention to the style.

Lee Hae-mi, a hanbok designer who is working to create a “new hanbok” style, sees the phenomenon as positive. “Hanbok is being worn by younger generations, while it was originally worn by older people in Korea,” she said. “I think there is a shift in people’s thoughts that hanbok is no longer difficult and uncomfortable to wear.”

She added that there was actually a concerted effort within the hanbok industry, as the popularity of the traditional clothing declined. “Hanbok was popular in 1980s but it became less popular because of the massive influx of expensive foreign brands - people didn’t value it much as in the past.”

According to her, hanbok trends have undergone three phases: First, it was the clothing people wore every day; then it became formal dress worn on special occasions, such as weddings; and now it is a special type of clothing people wear to expressing their individuality.

“Because people are familiar with ready-made clothes, people thought of hanbok as awkward; however, designers tried to bring fabrics and colors used in contemporary clothes in order to get closer to the people.”

With increased attention to hanbok, some people are trying to bring hanbok into their daily sphere. In general, they buy hanbok that is reasonable in price and comfortable - however, they do not give up the esthetic quality of the garment.

Kwon Mi-joo, 24, is one of these trend-setters. “I started wearing hanbok this year. I have three hanbok in total,” she said. “I liked it since I was young but I decided to wear it now because there were not many designs that suited my style and it was expensive in the past.”

While she bought two hanbok, she made another herself by taking lessons.

“I wear it mainly because it is pretty,” she said. 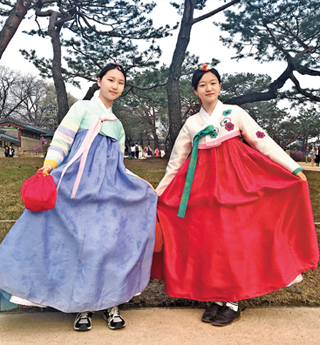 14-year-old girls visit Changdeok Palace earlier this month in order wear hanbok and take beautiful pictures. They say it was an interesting experience to try out the trend for themselves. [KIM HYE-JUN]

Kim Cha-ran, 25, who is now working at a hotel in central Seoul, also wears hanbok in her daily life. “I bought modernized hanbok with a skirt of shorter length and toned-down colors by searching online.”

She became attracted to hanbok on a trip to Jeonju Hanok Village, where she rented the clothes. With renewed interest in the garb, she began searching online and found that hanbok have become more refined in design.

“Several years ago, hanbok seemed very old because of their bright colors; however, hanbok these days have trendy colors such as serenity and rose quartz.” She added that modernized hanbok are also easy to manage, unlike traditional ones.

“Just because the overall designs change, I don’t think it damages the original value of traditional hanbok; rather, it’s positive as people can be more accustomed to our traditions, just like the Japanese wear kimono quite often.”

While individuals express themselves through hanbok, there are also groups of people who share their interest in hanbok - for example, a university club at Ewha Womans University.

Bae Soo-hyun, 21, is the leader of the club. Members gather regularly and go on small trips wearing hanbok.

“Hanbok started appearing on social media, but it wasn’t easy for me to wear it alone as it may look awkward among the crowd.” She joined the club in order to enjoy hanbok more often with people that have similar interests.

The club also lets other students at her university enjoy hanbok. On April Fool’s Day, the group held an event to rent their hanbok out to students, and almost 80 people participated, according Bae.

Another student Gang Seo-rim, 22, also inspired by social media, has purchased modernized hanbok both offline and online. She says the clothing is comfortable.

“I took pictures wearing hanbok with some of my friends on April Fool’s Day,” she said. “I think we can regularly come along and share more information about hanbok.”

While most traditional culture undergoes a somewhat top-down approach, in which the government works hard to promote cultural heritage, this bottom-up phenomenon is unusual and intriguing at the same time. 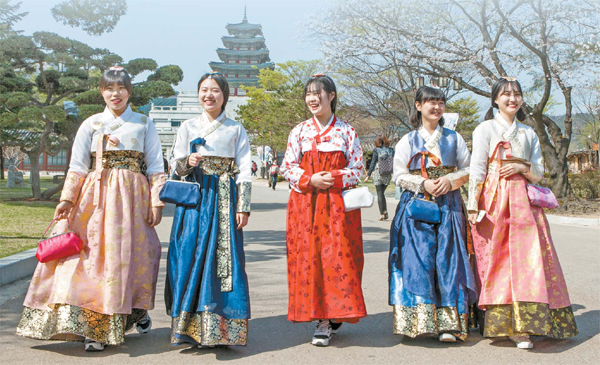 A group of girls wearing hanbok visit Gyeongbok Palace on a sunny day this month. Trying on the traditional garment for a special one-day is a popular trend among young people in Korea these days. [PARK SANG-MOON]

With such unprecedented attention towards the traditional garment, public institutions are constantly working to make the trend last in the long term. The Hanbok Advancement Center plans to develop the “new hanbok,” in collaboration with hanbok designers.

“People take pictures with hanbok for one-day events; in addition to this, it is necessary to foster more opportunities to enjoy hanbok,” said Jeon of the center.

In line with this goal, the center is planning a hanbok development project this year in collaboration with veteran hanbok designers, using traditional textiles. Also, it is planning a campaign to promote “Hanbok Day,” a major project of the center to celebrate its 20th anniversary. It will host a competition where it selects a couple of 20-year-old models from among citizens and host a flash mob with performances to appeal to foreigners as well.

The “Hanbok Collaboration Project” is also in the works, which will carry out collaborations with foreign designers and fashion brands, though the specific artists are yet to be designated.

The specific dates and guidelines for the events will be revealed in the future.

Meanwhile, the historic palaces in central Seoul - most notably Gyeongbok Palace - are free to enter for hanbok-wearers. The usual fee is 3,000 won.

In the long-term, some say there is room for improvement for this trend. While people find hanbok entertaining, it is necessary that it is worn in a right way.

“The overall process of wearing the clothes, how to lace up ribbons of the jeogori [the jacket] and how to style themselves with various traditional accessories are some parts that people find difficult,” said Jeon from the Hanbok Advancement Center.

For example, some people do not wear the undergarment that is necessary to give volume to the long skirt, which makes it less beautiful. And a tall woman might not wear the skirt at the right height, tying the skirt at her waist while it should be worn at chest height.

Designer Lee also has concerns about the trend. She says that although it is good that people enjoy wearing hanbok, “it should not be forgotten that it is valuable clothing that our culture, philosophy and lives are embedded in.”

“Wearing hanbok doesn’t only mean we wear it,” she added. “The basic philosophy is that we have to behave in dignity and politeness.”