Conglomerates have changed big since 1986

Conglomerates have changed big since 1986 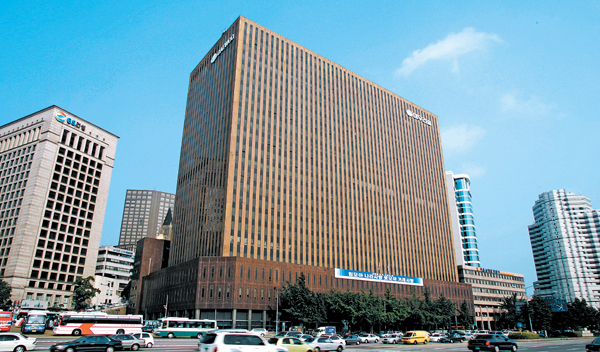 The former headquarters of the once top-ranking conglomerate Daewoo Group across from Seoul Station in downtown Seoul. [JOONGANG ILBO]

Back then, the title of top conglomerate by asset size was up for grabs, and it was competing with Hyundai Group and others for the spot.

Daewoo, which started off with textiles, rapidly expanded to other business areas, including electronics, automobiles and construction.

In the early ’90s, founder Kim Woo-choong, then the chairman, was the first to understand and act on the need for Korean businesses to expand globally. The group widened its lead by entering communist countries that its local competitors were unable or unwilling to do business with.

But as Daewoo grew in size, it was weakening internally.

The conglomerate’s aggressive expansion, paid for with massive loans, ground to a halt during the Asian financial crisis in the late ’90s.

After the corporate restructuring that started in 1998 ended in failure, Daewoo Group started to disassemble. Key affiliates, including its automobile, electronics, construction and heavy industries, all found new owners, including GM.

Although a few companies continue to operate under the traditional Daewoo banner, the once-dominating Daewoo Group has become mostly obsolete by 2016.

The list of the country’s top-30 conglomerates has changed dramatically over the last three decades.

Although the leading conglomerates remain almost the same, big changes have been seen with those in the middle and bottom of the list. There are only five or six whose owners and company names haven’t changed.

Currently, the antitrust watchdog Fair Trade Commission labels any businesses whose total assets add up to 5 trillion won ($4.35 billion) or more as conglomerates.

Up until 1986, which was before conglomerates began to expand into different business areas, the top 30 had just 420 affiliates.

One of the biggest changes in the last 30 years has been with Samsung, which is undisputed in the No. 1 spot. But until 1993, Samsung was the fourth-largest conglomerate in the country, trailing behind Hyundai Group, Daewoo Group and what was then known as Lucky Goldstar.

The company’s revenue and market capitalization has increased more than thirtyfold compared to 1986.

As of 2012, it became the first Korean company to reach the 300 trillion won in annual revenue, a landmark with a market cap accounting for one quarter of all those listed on the benchmark Kospi.

Samsung briefly struggled after jumping into the automotive business but maintained its competitiveness through its semiconductor, electronic consumer products and mobile phone businesses.

It also has the highest global brand recognition among Korean companies today.

Hyundai Group, which ranked No. 1 30 years ago, was split into three different conglomerates - Hyundai Group, Hyundai Heavy Industries and Hyundai Motor Group - as founder Chung Ju-yung passed on the company to his three sons.

Hyundai Motor today has grown five times larger than its previous mother company, Hyundai Group, before the affiliate spun off.

Today, it is the undisputed market leader in the Korean automotive sector and holds around the fifth or sixth rank in the global market. 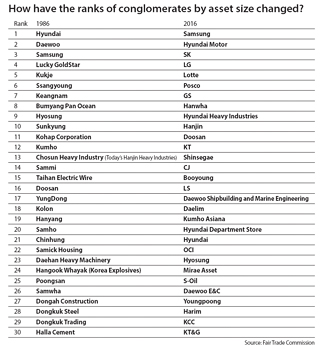 Although Hyundai Heavy Industries has struggled in the last couple of years due to the sluggish international shipbuilding industry, it still ranks in the top 10 of Korea’s conglomerates.

LG has solidified its position in the Korean business community by focusing on its electronics and chemical businesses, while GS has centered its efforts on energy and distribution.

SK Group, formerly known as Sunkyoung, rose to third place in 2005 and has remained in that position since.

The company’s assets, revenue and market capitalization all increased tenfold during the 2000s, making it the fastest-growing conglomerate after Samsung.

In the early 1970s, SK jumped into the refinery business and grew to become the industry’s No. 1 company. In 1994, it jumped into the mobile telecommunication services industry, further enlarging the company’s market capitalization.

Interestingly, Lotte Group, one of the nation’s leading retail conglomerates, wasn’t even on the top-30 list three decades ago, while Doosan Group, which ranked 16th in 1986, has moved up five ranks to 11th.

Kukje Group and Ssangyong Group, which ranked fifth and sixth on the top-30 list in 1986, no longer exist.

Kukje Group, which started to disassemble during the Chun Doo Hwan administration in 1985, was absorbed into Hanil Group in December 1986. The reason behind the breakup remains a mystery to this day.

Ssangyong Group, which started off manufacturing soap in 1939, expanded to other businesses including insurance, trade, cement, heavy industries and construction until the 1990s.

But as its automotive business came to fail, the entire conglomerate started to fall apart.

When the Asian financial crisis came, it was forced to sell off many of its key businesses but still failed to survive.

Ssangyong Engineering & Construction, which was the main pillar of the conglomerate, was finally delisted from the stock market in 2014 even though it underwent two workouts.

Bumyang Pan Ocean, which ranked eighth on the conglomerate lists 30 years ago, was absorbed into STX Group.

Chinhung Group and Samick Housing, which expanded during various real estate booms, have practically been wiped off the lists of leading conglomerates.

The list of conglomerates announced by the Fair Trade Commission earlier this month includes 65 business groups, including state-run companies like the Korea Electric Power Corporation and the Korea Housing and Land Corporation, whose total assets exceed 5 trillion won. That’s four more than the 61 groups registered last year. In total, these business groups own 1,736 affiliates, and their total assets amount to 79 trillion won.

The fiscal structure of these businesses has improved compared to the previous year, with their debt-to-asset ratio shrinking while net profits have risen.

Samsung topped the lists with total assets at 348 trillion won, although that figure shrank from 351 trillion won a year ago.

On the list, Hanwha saw the biggest increase in its assets year on year, from 38 trillion won to 55 trillion won, as the energy company purchased major affiliates from Samsung last year.

Harim, the company famous for its cheap chicken, also saw its asset size increase, largely thanks to its acquisition of shipping company Pan Ocean.

This year, former start-ups Celltrion and Kakao grabbed headlines by joining the lists of conglomerates with assets exceeding 5 trillion won.

Celltrion, a biopharmaceutical company whose total assets amount to nearly 5.9 trillion won, currently has the largest market capitalization on the secondary Kosdaq market.

IT company Kakao trails behind Celltrion on the junior market with 5 trillion won in assets.

But the widening gap between large conglomerates and small and medium-size companies is still considered a major issue that needs to be resolved.

Although the contributions that big companies make to Korea’s exports has continued to shrink over the last three years, from 66.8 percent in 2013 to 64.1 percent in 2015, two-thirds of the country’s outbound shipments still rely on conglomerates.

Additionally, while hiring from small and medium-size businesses accounts for a dominating 87 percent in the economy, those employees make just 62 percent of the annual salary taken home by employees at conglomerates.

The gap even among the leading conglomerates is getting worse as well.

In the past five years, the total assets of the top four conglomerates - Samsung, Hyundai Motor, SK and LG - have grown 27.3 percent.

During the same period, those ranked between 11 and 30 saw their assets grow only 1.5 percent.

The top four companies also accounted for 90 percent of the net profit of the top 30 conglomerates.