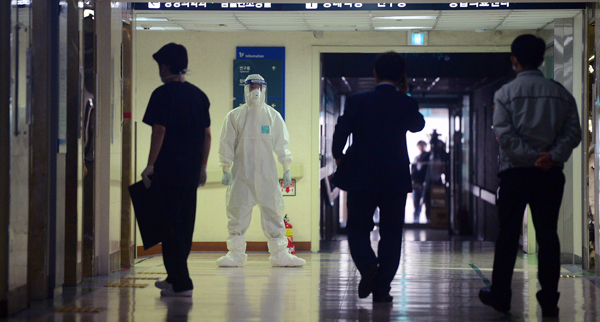 A hospital staff member restricts the entrance to the quarantined area of the National Medical Center on Wednesday after a woman from the United Arab Emirates suspected of carrying Middle East respiratory syndrome was quarantined at the center. [NEWSIS]

A United Arab Emirates national, formerly suspected to be carrying Middle East respiratory syndrome (MERS), escaped from a hospital in Seoul on Wednesday before being apprehended a few hours later.

The Korea Centers for Disease Control and Prevention (KCDC) announced later that the 21-year-old woman tested negative for MERS.

A worker from Kangbuk Samsung Hospital in Jongno District, central Seoul, said the woman visited the hospital’s emergency room at around 1:30 a.m. on Wednesday, accompanied by two guardians. Running a fever of 38.7 degrees Celsius (101.6 degrees Fahrenheit), the woman showed signs of MERS. The hospital immediately tried to quarantine her, but she left, saying that she would “wait in the car.”

The hospital staff then persuaded her to stay inside a negative pressure room, which was set up outside the emergency area. The woman was then transported from the car to the room by ambulance.

But the woman left the quarantine ward at around 3:30 a.m. with her guardians.

“It was difficult for the hospital to stop a patient and her guardians from leaving the hospital by their own will,” said a Kangbuk Samsung Hospital staff. “The fact that the patient was a foreigner made us more cautious in dealing with her.”

Jongno Police Precinct in Seoul received a report from the hospital at around 4:30 a.m. and began to search for the woman, finding her at a hotel in the Namdaemun area within three hours. Police tracked her down by using the address she provided when registering at the emergency room.

A fully equipped and protected official from the KCDC entered the hotel room to apprehend the woman, as she was still suspected of carrying MERS at the time. Quarantined in the National Medical Center, the woman received medical treatments and is showing signs of recovery. The KCDC said that, out of 311 suspected MERS cases this year, 77 have been further tested and all have proven negative so far.

Ever since a MERS breakout paralyzed the country last summer, the Ministry of Health and Welfare has worked to establish a specialized treatment system for infectious and contagious diseases. The ministry will be announcing amendments to the enforcement ordinance and regulation of Quarantine Act by May 23. The Quarantine Act was revised last December and is set to be enacted on June 30.

Since the MERS breakout, the Ministry of Health and Welfare has divided hospitals into three levels of contagion risk. The National Medical Center will exclusively treat new and high-risk infectious diseases, and will be equipped with more than 124 negative-pressure rooms in its quarantine wards.