Left: Civil servants in Gwangmyeong look over an exhibition of the Lascaux cave painting, a designated Unesco World Heritage Site, which will be held in Gwangmyeong cave, which was once a coal mine that has become a major theme park. Right: The dragon statue was made in New Zealand by the production team of the movie “Lord of the Rings” (2001-2003). [OH JONG-TAEK, GWANGMYEONG CITY GOVERNMENT]

A life-sized reproduction of France’s Lascaux cave painting, a Unesco World Heritage Site, will be held in the Gwangmyeong cave, Gyeonggi, starting this Saturday.

The Lascaux cave is presumed to have been inhabited by Cro-Magnons, one of the oldest Homo sapiens populations in Europe.

The exhibition of the Lascaux reproduction will be held from Saturday until Sept. 4, from 9 a.m. to 6 p.m.

The exhibition will also feature a replica of the Lascaux cave, one tenth its actual size. Land sights near the cave, such as the rivers, trees and rocks, will be reproduced with 130 beam projectors.

Gwangmyeong cave, built in 1912, during the Japanese colonization of Korea, was used for mining gold and silver until its closure in 1972. The entire length of the mine is 7.8 kilometers (4.8 miles) and the area inside is 342,797 square meters (85 acres). The mine is divided into eight parts, according to depth, with the deepest part, level eight, being 275 meters deep. Only a two-kilometer section of the mine’s first level is ordinarily shown to visitors.

After its closure, Gwangmyeong cave was used for about 40 years as a storage site for salted shrimp sold in Soraepogu, due to its year-round temperature of about 11 to 12 Celsius (52 to 54 Ferenheit).

Once an abolished mine, after three renovations the cave emerged as a major landmark for cultural and leisure activities in Gyeonggi. 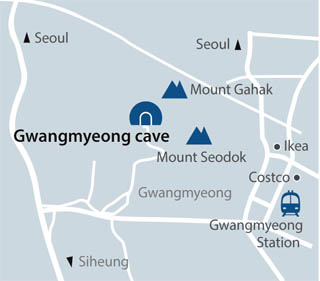 The first renovation took place in 2011 when the Gwangmyeong government purchased the cave for 4.3 billion won ($3.8 million) and turned it into a tourist attraction, displaying the images of the miners who used to extract gold from the cave.

In 2015, as the number of visitors to Gwangmyeong cave increased, the city government invested 17 billion won for further renovation of the cave. In the place where salted shrimp was once stored, the city government built a wine cellar, a wine tasting room and a wine restaurant. The government also installed dehumidifiers to reduce the humidity level to 60 percent.

The office also built an aquarium inside the cave, called Aqua World, by using the cave’s first-grade bedrock water, as well as a concert hall with 180 seats, and on March 27, a title match for the World Boxing Association took place on a specialized ring inside the cave, where the female boxer Choi Hyun-mi, who defected from the North, secured her champion title for the third time.

The renovation plans include building equipment for laser shows, expanding the wine restaurant and even creating a botanical garden inside the cave. Recently, Gwangmyeong installed a dragon sculpture that is 41 meters tall and weighs about 800 kilograms (1,762 pounds), the largest of its kind in Korea.

“Gwangmyeong cave is the first tourist attraction that was built from ground zero,” said Cho Won-duk, the head of the city’s Citizen’s Happiness Department. “By constantly developing exclusive contents for the cave, we will make Gwangmyeong cave into the nation’s best cave theme park, where tourists from overseas as well as Korea, will come and visit.”