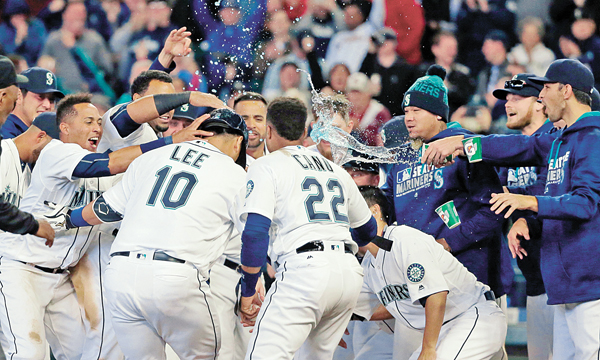 South Korean slugger Lee Dae-ho of Seattle Mariners (10) is greeted by his Mariners teammates after hitting a walk-off home run in the bottom of the 10th inning yesterday. Lee’s effort help the Mariners clinch its first home game win. [AP/NEWSIS]

Lee Dae-ho of the Seattle Mariners finally had his first moment in the big league yesterday as he drove a walk-off home run in the 4-2 win over Texas Rangers, snapping the team’s losing streak and helping to notch its first home game win at Safeco Field this season.


Lee’s epic pinch-hit homer happened during an extra inning in the bottom of the 10th when the game was tied 2-2. Lee came off the bench to replace Adam Lind, with the Rangers’ left-hander Jake Diekman on the mound. With a runner on base and two outs, the pressure was high for the 33-year-old first baseman.

Lee watched the first 97-mile-per-hour fastball by Diekman fly by. Although he swung at the second fastball, Lee fouled off the 95-mile-per-hour pitch. But Lee wasn’t going to let the third go. He smashed Diekman’s fastball that registered 97 miles per hour from the top of the strike zone and sent it over the left fence of Safeco Field. By the time Lee reached first, the 15,075 fans in the stadium went wild as they watched the ball fly over the Rangers’ outfielders.

After yesterday’s game, where Lee went 1-for-1 with two runs batted in (RBI) he now has three hits during his 13 at-bats for the Mariners with two home runs and three RBIs. The Mariners also have grabbed three wins while losing six this season. 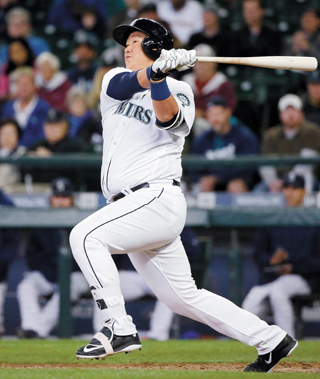 Lee’s second home run in the Major League couldn’t be timelier to allow some form of winning momentum before the Mariners travel to New York to take on the Yankees on Saturday.

“Really great effort by our club today,” the Mariners manager Scott Servais said after the game. “Exciting game. We really, really needed it.”

Lee’s home run yesterday makes the South Korean first baseman the first rookie for the Mariners to drive a pinch-hit game-ending home run. Lee also became the second-oldest rookie in the MLB history to drive a walk-off homer. The record was set in 1950 when 35-year-old Luke Easter of the Cleveland Indians blasted off a towering ball.

One of the drivers behind Lee’s success in the majors is his batting form.

Lee has maintained the same form for the past 10 years. He uses a textbook inside-out swing, in which the player keeps his hands inside the travelling path of the pitch by pulling in his back elbow near his stomach and flicking his hands as the bat travels through the hitting zone, ending with a slight upward arc. The form allows Lee to maintain his stability and balance even with a big leg kick, allowing him to be able to minimize his misses even against MLB pitchers.

Compare this with Park Byung-ho of the Minnesota Twins, whose bigger swing motion leaves him more unbalanced and has been one of the reasons he’s seen so many strikeouts this season.

Oh went to the mound in the early seventh inning when the Cardinals were behind 3-4. First up against Brewers’ Domingo Santana, Oh threw six balls and grounded him out. Next batter Scooter Gennett flied out and finally, Oh struck out Ryan Braun swinging.

This was Oh’s first game in three days, since his first MLB win against Atlanta Braves on April 11. In the five big league games Oh has played so far this season, he has not conceded a single hit, collecting nine strikeouts without giving up any hits or runs-scored. Despite Oh’s effort, the Cardinals lost to the Brewers 4-6.

Baltimore Orioles’ slugger Kim Hyun-soo also saw some playing time yesterday, starting ninth in the batting order and playing left field. During his two at-bats, Kim had no hits, two base on balls and one strikeout. His season batting average stands at .400, or 2-for-5.

While his compatriots have been putting out decent performances, Los Angeles Angels Choi Ji-man seems to be in a predicament. Choi has not been able to see much playing time for the Angels since the season started. Although he went into the game yesterday as a pinch runner for Albert Pujols in the ninth inning against Oakland Athletics, Choi was unable to score a run. Choi did not have a chance to bat for the Angels.