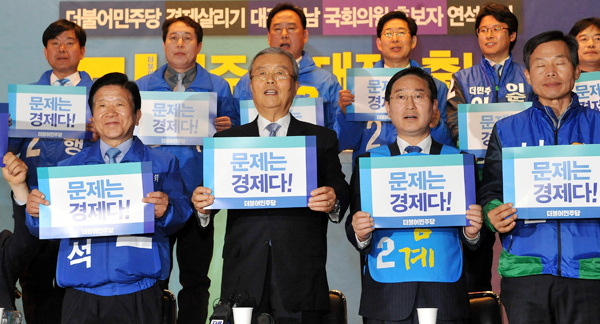 Kim Chong-in, center, interim leader of the opposition Minjoo Party of Korea, and the party’s candidates for the April 13 general election chant a slogan that reads, “The economy’s the problem,” in March. [KIM SEONG-TAE]

Voters going to the polls all probably wished their choices would be the right ones to help the economy. But afterwards, they felt little better than betrayed. There are already projections that the 20th National Assembly will be the worst. In the course of candidate nomination, parties had engaged in factional disputes without worrying about the future of the nation or its citizens.

But let’s give them another chance. Politicians have knelt down and asked for forgiveness. Like it or not, we have entrusted the highest decision-making authority to the members of the National Assembly. It is our duty to watch and pressure them to keep their promises.

In fact, their solutions to rejuvenate the economy — the prime promise of the election campaign — are already dead. The solution now is to restructure, cutting off the rotten parts to create new growth. The latest economic slump originates from structural problems, not the economic cycle. The same goes for the greater global economy. Despite a chronic supply surplus, demand is shrinking due to polarization. Quantitative easing and fiscal spending don’t help.

Pumping in more money, without restructuring, may in fact hurt the economy more. Japan proved it. When politics and the National Assembly are rotten, restructuring is not possible. The food chains of the establishment are riding on political power. They become the economic powers, the monopolistic conglomerates, aristocratic unions and cartels of the self-employed. They are extensive and powerful, and they would do anything to keep the existing market closed. When a ladder is put up to climb over the wall, they kick it away when they’re done using it. A class system is established, and polarization intensifies.

Structural reform cannot be achieved by passing a few bills. The overall economic picture should be centered on the market. Entrepreneurs and young people with pioneering spirit should be allowed to play freely, without regulations. Then, new industrial ecosystems will be born and jobs will be created. This is what Joseph Schumpeter calls “innovation through creative destruction.”
Structural reform is a process of constantly establishing “inclusive economic systems” to allow creative destruction. In history, countries with inclusive systems became prosperous, and those without became poor.

In order to establish an inclusive system, we must have trust, cooperation and care. These are the elements of “social capital.” No matter how abundant material and human capital is, it is widely acknowledged in economic and social studies that a country cannot become a developed nation without the social capital of compromise and concession. A society with selfish members and without civic awareness for public interest rapidly becomes full of discord and hostility, and this will, of course, also affect the economy. Korea’s social capital is becoming increasingly shallow. It is one of the reasons that structural reform is not happening.

Politics have been largely responsible. Politicians took sides and fueled discords. I would like to ask the elected lawmakers of the 20th National Assembly to stop fighting for hegemony and promote communication and compromise to resuscitate the economy. They should go all the way on discussions and reach an agreement for reform. It is the mission of politics to get concessions from the establishment, help the underprivileged and create a community where members respect one another.

Fortunately, the legislature has gotten a rare opportunity to pursue structural reform. The economy has started to warm up. In the spring, economic indicators such as industrial production and consumer confidence are improving. While they are technical, a rebound from last year’s Middle East respiratory syndrome outbreak and the strength to endure structural reform have since grown. External factors are improving as well. The United States is slowing down to raise the interest rate, and concerns about the Chinese economy have alleviated. Prices of raw materials are going up as well. As structural reform gains momentum, the Bank of Korea and the government are ready to support lowering interests and expanding fiscal spending. Next year is the presidential election year. Reforms may lose priority. Domestic and international economic situations may change anytime. This year is the golden time for the 20th National Assembly to revive the economy.