They may look strange, but these grannies are serious about hip-hop

They may look strange, but these grannies are serious about hip-hop 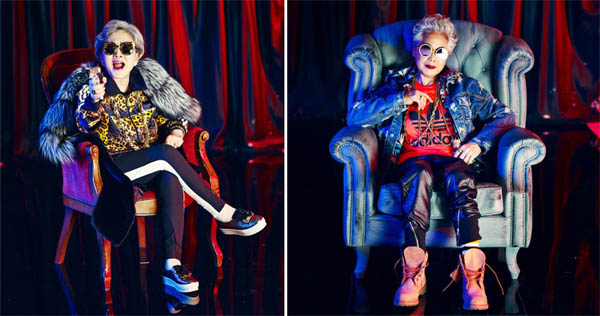 JTBC’s new program “Hip-Hop Nation” features eight older women, including veteran actress Kim Young-ok, above left, and Choi Byung-joo, above, who participate in rap battles against each other. The average age of the eight contestants is 65. [JTBC]

JTBC’s new reality show, “Hip-Hop Nation,” is not your usual hip-hop competition for young rapper wanna-bes. In fact, the average age of the all-female participants is 65.

Although these women are familiar faces on local TV, including actresses and a pansori (traditional narrative singing) performer, they are certainly not the type you would expect to see in a rap battle, decked out in true hip-hop style, rapping out the lyrics they’ve worked on with the help of young hip-hop artists.

After pairing up with young Korean hip-hop artists including MC Sniper, Cheetah, P-Type, DinDin and others, the eight contestants, dubbed “Halminem” — a portmanteau of the Korean word for grandmother, halmoni, and the popular American rapper Eminem — began the first round of the rap battle, which aired last Friday.

And despite initial concerns that the show might be the subject of ridicule, the sincere performances and rapping skills of the “granny rapstars,” veteran actresses Kim Young-ok, Yang Hee-kyung, Lee Kyung-jin, Lee Yong-nyeo and Moon Hee-kyung, pansori singer Kim Young-im, and TV personalities Choi Byung-joo and Yeom Jung-in, amazed viewers as well as their young mentors.

To learn more about the show, Ilgan Sports, an affiliate of the Korea JoongAng Daily, recently sat down with Song Gwang-joong, a producer of “Hip-Hop Nation.” Here are some excerpts from the interview.


Q. There’s been a flood of positive reviews and a spike in viewership ratings. How do you feel about it?

A. It only just started and I hope it continues this way. But I guess we have to surprise our audience more than just showing grandmothers rapping to achieve that goal. So we are working hard to figure out the way.


The viewers especially praised the competing grannies’ enthusiasm. What do you think?

Their passion for hip-hop is just amazing. They’ve been even telling their mentors to teach them more and that they need more time to practice together. I heard them jokingly say that they’ve “got to work at it more or try dying.” They are really putting all their energy into it.


What are your concerns for the show?

I know this show won’t have the quality of a professional music program, but I’m trying hard not to make it look ridiculous. I don’t want the contestants to be laughed at. The contestants may not look like professional rappers, but I wanted them to be at least seen as passionate grannies.

On this program, there’s not going to be any dropouts or additional contestants. These eight contestants will compete with each other until the end, possibly swapping first place depending on their performances for each episode. I just hope to see the contestants improve on each episode, and by the end of the program they may be able to stage a performance without the help of their mentors.


Were you satisfied with the first battle?

I was surprised by the responses from the audience that came to see the shooting of the performance. I was concerned that they might feel embarrassed to see grannies rap, but the audience was really enthusiastic as well. It turned out pretty well.


What were you not satisfied about?

I was quite upset that the viewers perceived the rapper Cheetah as rude to her partner contestant, granny Choi. We didn’t mean to feature her like that, and we should be more careful when editing the show from now on. Choi lives in Taean, in South Chungcheong, which takes about five hours to get to and from Seoul. Since Choi also has a job in Taean, it’s not like she can come to Seoul any time to get lessons from Cheetah.

So I guess Cheetah was quite strict with her. She even rescheduled her day to devote five hours to teaching Choi. On our program, the young hip-hop artists were recruited as helpers for these granny contestants. Winning or losing is not that important for them. Cheetah has been working really hard with Choi, and I regret that she was viewed in a different way.


How is the collaboration between the grannies and the young rappers?

In fact, there should be a large gap between them, but they get along great. The grannies follow them like little students, and at the same time the artists treat them with respect.


How many battles will the contestants have?

You’ll be amazed by the performances of Moon and Yang. They are at such a high level it will make your jaw drop. We are also trying to show more scenes of contestants practicing during the program, and certainly we are not planning on editing the program in our favor. The only thing on our mind is how these granny contestants can find joy in rapping on one episode after another, and how our viewers can enjoy watching these women enjoy a new genre of music.