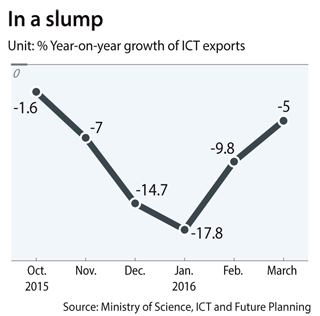 Exports of Internet, communications and technology (ICT) products fell for the sixth month in a row, according to data from the Ministry of Science, ICT and Future Planning on Thursday.

After posting a year-on-year decline of 1.6 percent last October, ICT exports have been on a downward slide. November saw a fall of 7 percent from a year earlier, followed by 14.7 percent in December and as much as 17.8 percent in January. The pace of decline began slowing in February and March. Last month’s ICT exports fell 5 percent year on year to $13.97 billion.

The ministry cited weak global demand for ICT products and the economic slowdown in China, Korea’s top export market. The better performances in February and March came after exports of smartphones and semiconductors grew.

Thanks to the release of the Galaxy S7 premium smartphone from Samsung Electronics and the G5 from LG Electronics, smartphones shipped overseas - to the United States, in particular - picked up 7.9 percent in March from a year earlier to total $2.32 billion.

By region, exports to the United States shot up 40 percent in March from a year earlier on the back of the popular Galaxy S7 and G5 smartphones. The exports hit $1.8 billion. Notably, Korea exported 85.1 percent more to India over the same period, even though the scale is still one-sixth of the United States at $350 million.

However, China imported 9.1 percent fewer ICT goods from Korea in March from a year ago at $7 billion. The second-largest economy in the world has been increasingly reliant on domestic supplies of ICT goods as the government provides hefty subsidies and Chinese manufacturers have caught up with global players. That reduced import demand for displays and parts for smartphones and TVs. The European Union also brought in 15.7 percent less from Korea over the same period at $720 million.

Korea’s ICT product imports in March edged down 4.5 percent year on year to total $8 billion. Smartphones grew 30.9 percent on year, followed by semiconductors at 7.4 percent and digital televisions at 57.2 percent.