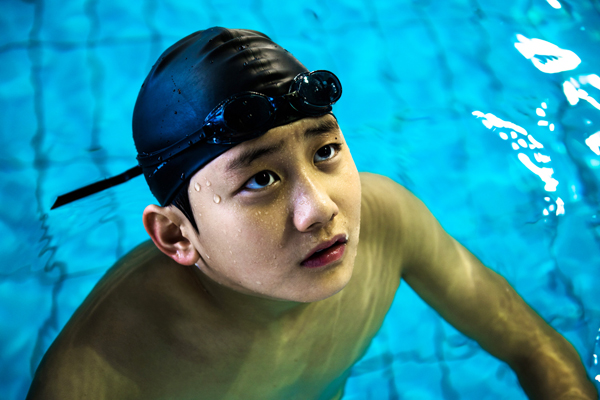 Jung Ji-woo’s “Fourth Place” condemns Korea’s score-oriented society with the story of a young swimmer, played by Yoo Jae-sang, who is pushed to win. [PRAIN GLOBAL]

“The winner takes it all.”

So sang the international pop group ABBA about the experience of divorce in their legendary 1980 song of the same title.

But love and marriage are not the only things for which this holds true. In fact, there is no other field that better embodies this harsh truth than sports.

The training process is extremely excruciating both physically and mentally, but the only way to get acknowledged for the effort is to win medals. If you finish below the top, no one will remember you even if you performed fairly well.

The gold medalist or the No. 1 spot is all that matters and all people will remember.

The just-released film “Fourth Place” addresses this issue, which is especially severe in Korean society where the education system is solely oriented toward grades and test scores. The film has been righteously produced by the National Human Rights Commission of Korea and directed by Jung Ji-woo of “Eungyo” (2012).

Teenager Jun-ho (Yoo Jae-sang) has been swimming as long as he can remember. In addition to being talented, he very much enjoys the sport, being able to glide through the water freely. The free-spirited boy, however, comes in fourth place every time he participates in a major competition, which drives his control-freak mother crazy.

She hysterically calls him “hey, fourth place” and insults him for not being able to do better.

As a last resort, the mother recruits a notorious swimming coach known for pushing his students to finish on top. 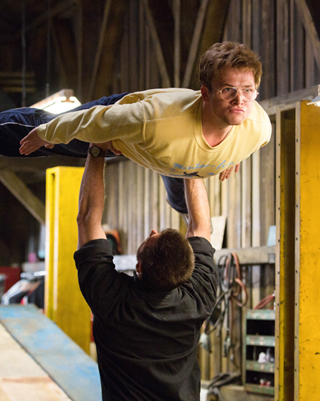 After a few months of training, Jun-ho finally manages to finish in second place, but only after his mother finds out that Jun-ho was getting beaten up by the coach regularly every time he didn’t “focus” on swimming.

But the mother ignores the problem, because her son finishing in fourth place again scares her more than his being covered in bruises.

“In Korea, fourth place is considered a complete failure,” said director Jung at a recent press conference. “But what is more difficult with being No. 4 is that it is not easy to completely give up. So I tried to realize that uncertain feeling in the film, where you are discouraged but not completely hopeless at the same time.”

Jung also addressed the violence element, which is the National Human Rights Commission’s motivation for producing the film.

“I didn’t want to depict Jun-ho’s mother and the coach as simply ‘bad people’ because I think the reality is much more complicated than that,” he said. “I think society itself has become hard to endure unless you have one or two flaws. The coach and the mother represent such people who need to have flaws to survive in this society.”

The low-budget film opened on Wednesday.

While the “Fourth Place” portrays the pitiless world of sports in a more grim way, there is another film in theaters at the moment that approaches the issue in a slightly different way.

Dexter Fletcher’s true-story-based film “Eddie the Eagle,” which opened nationwide last week, also depicts the merciless reality of competitive sports where the underdogs are constantly looked on and bullied. The movie is about British ski jumper Eddie “The Eagle” Edwards who participated in the 1988 Calgary Winter Olympics.

Eddie, played by “Kingsman” star Taron Egerton, doesn’t have the type of physique of a national athlete who competes in the Olympics. He is chubby and wears thick glasses. The Olympic Committee of Great Britain as well as his own father continuously discourage Eddie, telling him to give up skiing and do something “worthwhile.”

However, filled with optimistic thinking and a true Olympian spirit - which is not about winning but about participating in the world-class competition - Eddie manages to become a national hero of Great Britain even though he doesn’t come in first place. And Fletcher adds a comedic slant to the film.

“Fourth Place” and “Eddie the Eagle” both explore the cutthroat world of sports, which is at the epicenter of the winner-takes-all mentality.

However, both films try to convey that winning and being No. 1 is not all there is to playing sports and finding happiness. The process is just as important as the end result, the films emphasize. And this message is sure to resonate with people who have felt stressed out by the achievement-oriented society of today.