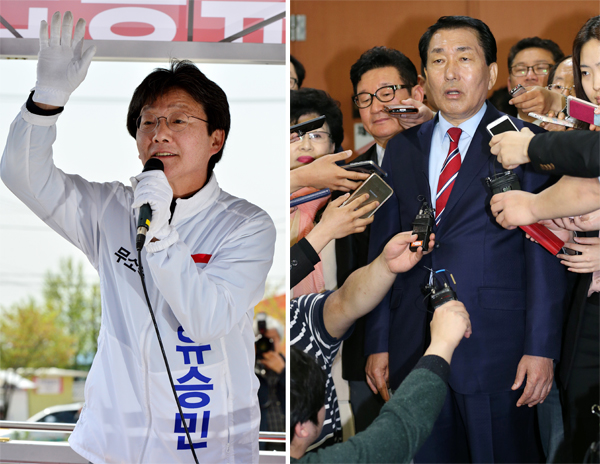 Yoo Seong-min, left, and Ahn Sang-soo, right, were elected as an independent after defecting the Saenuri Party. Reinstating independents now becomes an important issue for the Saenuri Party after the ruling party lost the largest party status in the legislature. [NEWSIS, CHO MUN-GYU]

After failing to gain a majority in the legislature through the general election, the Saenuri Party is looking to reinstate the seven lawmakers who won seats as independents after defecting from it.

There were 11 independent lawmakers who won seats this time around, higher than before, and of these, seven were former Saenuri members who had left the party because they failed to win nomination tickets from the party.

These lawmakers included Rep. Yoo Seong-min, who resigned after failing to get a nod from the Saenuri Party, and Rep. Joo Ho-young, a third-term lawmaker.

Yoo won the Daegu Dong B District seat with an overwhelming 75.7 percent support and has already stated his intent to rejoin the Saenuri Party.

“As much as I have said I will rejoin the party, I will do so,” Yoo told reporters Thursday. “However, right now the party is in a difficult situation so I thought it is not the right way, so I am waiting for the right timing.”

Joo, likewise, has represented Daegu’s Suseong B District for 12 years, and with 45 percent support he beat the Saenuri candidate, Lee In-sae, who garnered 25.2 percent of the votes.

The committee dropped lawmakers close to Yoo, the former floor leader, whom the president branded as a betrayer for going against her will.

But if Saenuri reinstates these seven independent lawmakers, they will once more have the majority.

The main opposition Minjoo Party is now leading against the Saenuri Party by one seat with 123 lawmakers elected Wednesday.

And pro-Park faction members who have been adamant about not reinstating those who defected from the party are now singing a different tune.

Saenuri’s Rep. Choi Kyung-hwan, who is in charge of the party’s campaign in Daegu and North Gyeongsang, initially said that lawmakers who had defected “should not be allowed to return to the party for at least two years.”

However, Choi, a Park loyalist, changed his mind at a campaign meeting in Daegu Thursday, saying, “This is now an issue to be decided by the party, because reinstating candidates to the party is a sensitive issue.”

There is also expectation that a faction of lawmakers who are not Park loyalists, surrounding Yoo and Joo, may play a pivotal voice in the party should they rejoin Saenuri.

There is also expected to be a sense of urgency to regain a majority before a new speaker of the National Assembly is voted upon when the new session kicks off around June. A speaker will be nominated and will gain the position by winning a majority.

Won Yoo-chul, the Saenuri floor leader, said, “We need to start discussions now. While we cannot not accept them, we need some more time to think.”