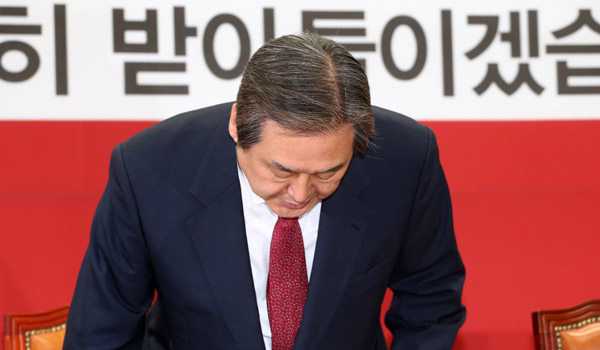 Kim Moo-sung bows out from the chairmanship of the Saenuri Party on Thursday, taking responsibility for the party’s crushing defeat in the general election. [KIM KYUNG-BIN]

The Saenuri Party of President Park Geun-hye lost its majority in the National Assembly and was reduced to the second-largest party, an unprecedentedly humiliating defeat in Wednesday’s general election.

In modern Korean political history, the party of the incumbent president has lost its majority in the assembly but has always been the largest party.

Party Chairman Kim Moo-sung resigned Thursday to take responsibility. “The Saenuri Party exhibited an arrogant and embarrassing face during the election and failed to unite, disappointing many people,” Kim said. “We were crushed because we forgot that politicians should serve the people and fear the people, not anyone else."

“I will take all the responsibility for the election defeat and step down from the chairmanship as of today,” Kim said.

According to the National Election Commission, the main opposition Minjoo Party of Korea won 123 seats in the 300-member National Assembly, and the Saenuri Party won 122. The People’s Party of Ahn Cheol-soo won 38 seats, making it a brand-new political force. The Justice Party won six, and independent candidates won 11.

The Minjoo Party became the largest party in the National Assembly for the first time since 2004, when it was called the Uri Party. Excluding the independents, the three liberal and centrist opposition parties occupy 167 seats in the legislature. It is the first time in 16 years that liberal lawmakers will outnumber conservatives in the legislature.

The largest party is allowed to nominate the National Assembly speaker and chairmen for key standing committees. Because no party has a majority, support from the People’s Party will be crucial for the Minjoo Party.

As a result, President Park will struggle through the remainder of her 22 months of her term, as voters disgruntled with her high-handedness and poor economic performance - and the factional strife that erupted during the party’s nomination process - awarded victories to the opposition.

The Saenuri Party has lost its power to railroad bills through, and the liberals, if allied, can propose impeachments of the prime minister and ministers.

Kim also told the JoongAng Ilbo on Thursday that the party must welcome back independent candidates who quit the party after the nomination committee, controlled by Park loyalists, denied them tickets. Of the 11 independent winners in Wednesday’s election, seven were former Saenuri members, including Rep. Yoo Seong-min, and they have already vowed to return to the party. If they are reinstated, the Saenuri Party will become the largest political force once again.

“They proved with their victories that the nomination decisions were wrong, and all of them must be reinstated,” Kim said. He also warned Park loyalists to not resist their return. “If they cause trouble again, they will be caned. It’s time for all of us to apologize to the public,” he said.

Of the 300-member legislature, 253 will be lawmakers representing electoral districts and 47 will be proportional representatives named by political parties. Of the 253 districts, the Minjoo Party won 110 constituencies, the Saenuri Party 105, the People’s Party 25, the Justice Party two and independent candidates 11.

Of the 47 proportional representation seats, the Saenuri Party won 17, the Minjoo Party and People’s Party each won 13, and the Justice Party won four. 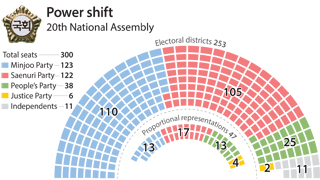 Other Saenuri leaders, including Secretary General Hwang Jin-ha and a member of the Supreme Council, Kim Tae-ho, also stepped down on Thursday following the crushing defeat. More Supreme Council members, including Rhee In-je and Kim Eul-dong, are expected to resign as they were defeated in their individual races. Rep. Suh Chung-won, a close confidant of President Park who managed to win an eighth term on Wednesday, did not attend the campaign disbanding ceremony. The party is expected to form an emergency leadership and hold an early convention to elect a new leadership in the coming months.

While the ruling party licked its wounds, presidential spokesman Jung Youn-kuk said, “We hope the 20th National Assembly will pay attention to the livelihood of the public and serve the people. Such a demand from the public appeared to be reflected in the outcome.” Conspicuously missing from the statement was any mention of the Blue House’s “acceptance” of the crushing defeat.

The Minjoo Party’s interim chairman, Kim Chong-in, hailed the main liberal party’s victory. “The people held the Park administration and Saenuri Party accountable for their failures in managing the economy,” Kim said. “The biggest meaning of this election is that the Saenuri Party lost the majority in the legislature.”

Kim was actually the architect of Park’s economic pledges in her 2012 presidential campaign but parted bitterly with her after her inauguration. Moon Jae-in, the liberal presidential candidate defeated by Park, recruited Kim to head the Minjoo Party’s campaign. In a Twitter message, Moon said, “I am expressing my deep, deep appreciation. The voters showed us great hope to be able to change the administration.”

The Saenuri Party fared particularly badly in the capital districts, where 122 seats were at stake. It only managed to win 35 races in Seoul, Incheon and Gyeonggi. It surrendered its traditional strongholds of Gangnam B, Songpa B and C, Gangdong A and B and Bundang A and B for the first time.

While the Saenuri Party was crushed in the capital districts, the Minjoo Party put up a good fight in the traditional Saenuri stronghold of the Yeongnam region - Busan, Daegu and North and South Gyeongsang provinces. Of the 65 Yeongnam districts, the Saenuri Party lost in 17. The Minjoo Party won eight in Busan and South Gyeongsang and two in Daegu.

The People’s Party prevailed in Honam, composed of Gwangju and North and South Jeolla. Of the 28 districts there, it won 23.

The two victories by the Saenuri Party in Jeolla were also seen as a sign that regionalism is fading in Korean politics, as were the Minjoo Party’s victories in Yeongnam.

Through Wednesday’s election, Ahn’s People’s Party secured enough seats to form a negotiation bloc in the National Assembly and became the third-largest power in the legislature. Despite its short history, the People’s Party, established by Ahn at the end of last year after he quit the Minjoo Party, won the right to send representatives to legislative negotiations by securing more than 20 lawmakers.

The Saenuri Party and Minjoo Party - in previous incarnations and under different names - have dominated Korean politics for decades with deeply-rooted regionalism.

The Saenuri Party is supported by Yeongnam voters, while the Minjoo stronghold is Honam. The Minjoo Party also enjoyed popularity in the working-class districts of Seoul, Incheon and Gyeonggi.

The Saenuri Party is conservative, meaning pro-business and anti-North Korea, while the Minjoo Party is liberal, anti-big business and in favor of engaging North Korea.

The 20th National Assembly is now divided among three major parties - the Saenuri Party, Minjoo Party and People’s Party - for the first time in 20 years.

On Thursday, Ahn vowed to serve the people.

“As the true speaker of the people’s desire for change, we will renew ourselves,” Ahn said. “We will change politics and win the presidency and repay the people with politics that will improve their lives.”