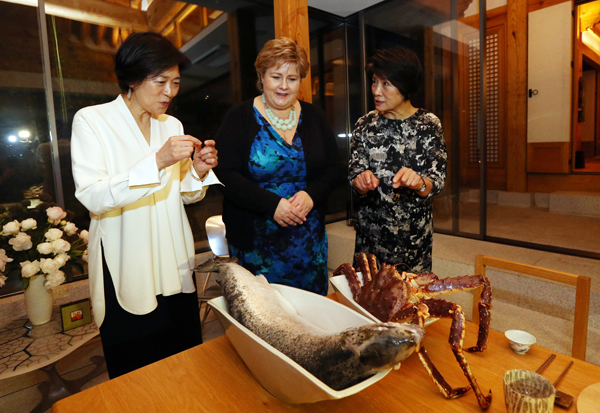 Norwegian Prime Minister Erna Solberg made her first visit to Korea since her inauguration in 2013 on Thursday, kicking off a four-day tour to boost bilateral ties between the two countries and highlight the importance of achieving sustainable development goals through politics, partnerships and people’s participation.

Today, she will have a summit meeting with Korean President Park Geun-hye. Solberg is the second female prime minister of Norway.

Soon after her arrival on Thursday, Solberg visited Gyeongbok Palace in Jongno District, central Seoul, to learn about the history of the Joseon Dynasty (1392-1910), where she also watched a demonstration of the advanced humanoid robot, Hubo, developed by the Korea Advanced Institute of Science and Technology.

She then visited the residence of Shin Yun-gyun, chairwoman of Arumjigi Culture Keepers Foundation, a nonprofit dedicated to promoting traditional Korean culture, for a dinner reception in Hannam-dong, Yongsan District, central Seoul.

The invitation was reportedly initiated by Dho Young-shim, chairperson of the UN World Tourism Organization’s Sustainable Tourism for Eliminating Poverty Foundation, who heard Solberg was interested in gastronomy and the establishment of bilateral ties in relevant sectors through the exchange of ingredients.

Shin heard about Solberg’s deep enthusiasm from Dho, and then went on to plan a dinner party that would feature traditional Korean cuisine using Norwegian ingredients. The Prime Minister’s Office accepted the invitation and volunteered to sponsor the raw goods and send over king crabs and Atlantic salmon to Shin's residence through the Norwegian Embassy in Seoul, but the embassy said it purchased Norwegian goods that were already available in the local market.

A total of 11 people were invited to Thursday’s dinner, six of whom represented Norway, including Solberg; Torkild Solli Haukaas, state secretary of the Prime Minister’s Office; Jan Ole Grevstad, Norwegian ambassador to Korea; Thomas Gass, assistant secretary general for Policy Coordination and Inter-Agency Affairs in the UN’s Department of Economic and Social Affairs; Odd Magne Ruud, director general of the Prime Minister’s Office; and Espen Gullikstad, special adviser to the prime minister at the Ministry of Foreign Affairs.

Representing Korea were five people, including Shin and Dho, as well as Hong Seok-hyun, chairman of the JoongAng Ilbo and JTBC, who is also Shin’s husband; Kim Kwan-yong, governor of North Gyeongsang; and Ellana Lee, vice president and managing editor for CNN International Asia Pacific.

The full-course meal was prepared by Onjium, a traditional culture research center under Arumjigi Culture Keepers Foundation. An official from the center said the key priority of Thursday’s dinner was to “highlight the freshness of Norwegian ingredients while creating deep, traditional Korean flavors.”