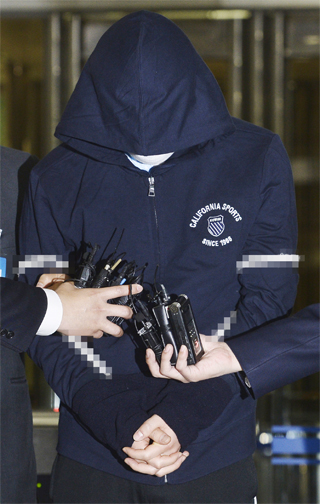 A police investigation into the 26-year-old man who broke into the Central Government Complex five times in the past two months revealed a colorful past — and a talent for breaking rules to get what he wants.

Police handed the suspect, surnamed Song, to the prosecution Thursday on charges of trespassing, theft, obstruction of public office work, alteration of records and forgery. Song broke into the government office to change his failing grade on a civil service exam to a pass.
Song showed notable skill in that penetration, stealing government officials’ identification cards from a locker room, wearing sandals around the complex to better resemble someone working in the building, and having ready a hacking program on a USB drive to penetrate the computer security system.

It turns out Song had plenty of practice in subterfuge and rule breaking from his college years.

According to the police, after his first semester as freshman in college, Song decided to take College Scholastic Ability Test (CSAT) — the national college entrance exam in Korea — once more in 2010 to get admission to a better school. After forging a medical document, Song registered as a test-taker with disabilities — in his case, with weak vision. This allotted Song 50 percent more time per test than given other test-takers. Song used this extra time to pop into the bathroom after the normal test-takers had left, where he had hidden a smartphone. He checked online the answers uploaded after each test was finished, which was the norm at the time. Song got excellent scores in all subjects except Korean language and literature.

Song didn’t get into a new college, but his ambition remained. In 2011, he registered to take the CSAT again, once more as a test-taker with disabilities. But the procedure had changed and answers were no longer posted after each test concluded.

Police discovered that in the college Song is attending now, he skipped a number of classes but made sure that six of them were excused absences for a medical complaint: lumbar spinal stenosis. He allegedly forged a medical document to prove the ailment.
In order to fulfill the prerequisites to take the national civil service exam, Song forged and stole some more.

A college student must be selected by his school to take the civil service exam. The process usually involves GPA qualifications and tests. Song tracked down a private tutoring academy in Sillim-dong, southern Seoul, that had a role in writing his college’s test. He stole copies of test and answers from the academy and aced the exam, receiving approval to take the civil service exam.

Civil service test-takers also need a score higher than second grade in the Korean history test conducted by the National Institute of Korean History and higher than 700 in TOEIC, the English proficiency test in Korea. Song changed the date on his forged medical document about his poor eyesight and used it again to get more hours to take the tests.

Song was finally caught four days after he had changed his test result in the Central Government Complex computer, when an official in charge noticed that the number of successful test-takers had changed from 49 to 50.