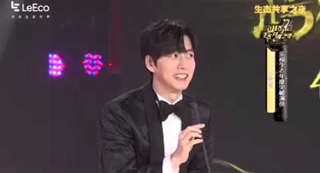 Korean Wave star Park Hae-jin has won the Actor of the Year award at the LETV Entertainment Awards in Beijing.

“With the Actor of the Year award, Park’s value has been elevated to rival that of local actors,” Park’s agency said.

The actor emerged in the Chinese drama scene through the show “Qian Duo Duo Get Married” (2012), and continued to build his acting career there, starring in three more dramas including this year’s “Far Away Love,” in which Park played the award-winning role.
“I will be more diligent and be active in both Korea and China,” the actor said.

Meanwhile, Park is planning to hold a free fan meet to celebrate his 10-year anniversary of his debut on April 23 at Olympic Park in southeastern Seoul. The event will be broadcast via Naver’s live-stream service V and Chinese video site Youku. Profits from the broadcast will be donated in Park’s name to help children in China.