Korean markets shrug off a ‘new normal’ in China

Korean markets shrug off a ‘new normal’ in China 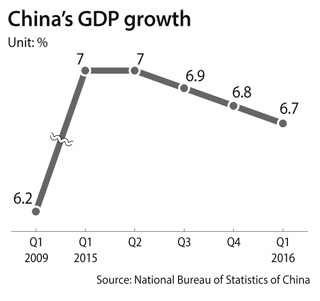 Korea’s capital markets were stable despite the Chinese government’s announcement that its gross domestic product grew 6.7 percent in the first quarter, indicating the slowdown is continuing.

China met its growth forecast, which was between 6.5 and 7 percent, but the pace was the lowest in seven years since GDP grew 6.2 percent in the first quarter of 2009 in the wake of the 2008 global financial meltdown.

The local capital market contracted slightly soon after the GDP announcement was made Friday morning, pushing down the primary Kospi index by 6.23 points to trade at 2,009.7 points. However, the index ended almost flat at 2,014.71 points, down 0.06 percent or 1.22 points.

The secondary Kosdaq index went up slightly by 0.32 percent to close at 695.62 points.

Analysts explained that market participants thought the 6.7 percent growth was better than expected.

“The local capital markets stayed strong as the first-quarter result turned out much better than gloomy January data would have suggested,” said Cui Xuehua, an analyst specializing in the Chinese economy at Korea Investment & Securities.

“The Korean capital markets will stay strong at least through the second quarter as the Chinese economy is expected to keep recovering, considering the central government’s expansionary policies and the fact that leading indicators look healthy.”

Beijing is slated to begin cutting corporate taxes in May, and investments on infrastructure projects are planned to expand through the year, Cui said.

Leading indicators like production and new real estate projects have shown signs of recovery compared to the end of last year.

Han Jae-jin, head researcher on the Chinese economy at Hyundai Research Institute, explained that global worries about China’s hard landing have dissipated thanks to enhanced retail sales and investment data from the first quarter.

“China’s growth won’t rebound drastically in a V or U shape anymore, but it will slowly grow through the end of the year as the central government pushes restructuring policies for insolvent state-run enterprises,” Han said.

In the first three months, retail sales grew 10.3 percent compared to a year earlier, and asset investment grew by 10.7 percent, according to the National Bureau of Statistics of China.

The export of services and Korean cultural content, including K-pop, television series and movies, will grow further. In the first quarter, China’s service production grew by 7.6 percent, Cui said.

But some analysts worry that the Chinese central government’s construction-based stimulus policies may leave the country with too much debt, offsetting its economic restructuring efforts.

“The state-owned enterprises’ return as leaders in rebounding investment and output growth is a haunting reminder of mistakes committed during the 2009-10 stimulus effort,” Brian Jackson, an economist from HIS Global Insight, wrote in a note published on Friday.

“These indicators remain well below their peaks during that period, but are moving in the wrong direction at an accelerating pace.

“If state-led growth continues for several quarters, it will cast serious doubt on how comprehensive China’s reform program might be during 2016-17, despite many other positive signals in recent months about willingness to tackle difficult issues,” Jackson warned.