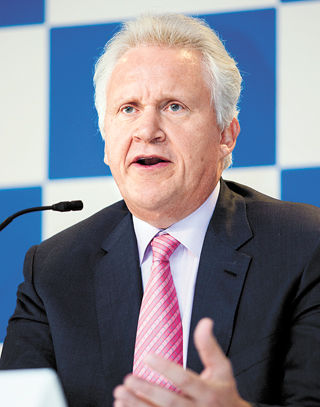 General Electric CEO Jeff Immelt, who is spearheading the digitalization of his company, said Tuesday that utilizing big data could be one solution for manufacturing businesses to improve their production efficiency and survive in a slowing economy.

“By improving the fuel efficiency of jets by 1 percent, the world’s airline companies can save up to $3 billion,” Immelt said. “Through big data and Internet of Things tech, GE has been trying to make innovations. I think Korean companies can make such attempts as well.”

Immelt visited Korea to partake in the GE Innovation Forum 2016, which marks the 40th anniversary of GE’s presence in Korea. The main theme of the forum was how to navigate through the so-called fourth industrial revolution, which refers to a convergence of manufacturing and information and communications technology such as big data and the Internet of Things.

GE is at the forefront of such changes, having recently undergone a major restructuring of its business portfolio to make the company more digitalized and leaner.

“Innovation is about taking risks, being willing to fail and being purposeful about success,” Immelt said. He added that while risk-taking is difficult, not doing anything at a time of slow growth would be an even bigger risk.

“There were other investment choices that we valued highly… and to be a winner in a long term, we chose to sell,” the CEO said. Immelt then made GE’s largest acquisition ever, of Altom’s energy business, to strengthen its identity as a high-tech company.

Now the company focuses on software that provides the real-time status of industrial machines such as turbines and jet engines via what the company calls the “industrial Internet.” Immelt stressed that the need to develop an industrial Internet is not optional anymore but a necessity, and that Korean companies must get serious about it, too. “We will become a top-10 software company by 2020,” he said.

When asked about detailed strategies to prepare for drastic change in a company, Immelt cited decentralization, digitalization and more partnerships. In terms of governmental support, he said laws that support small and midsize enterprises to more effectively do business are necessary in the world and also in Korea.