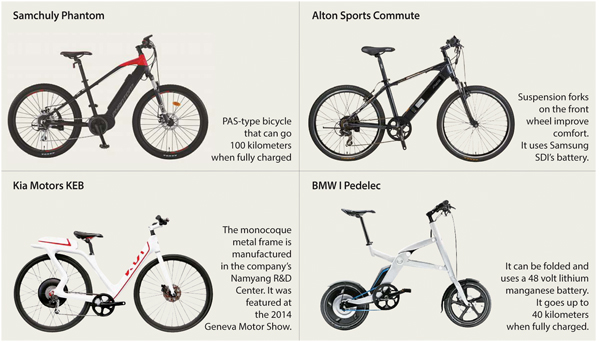 Chung Young-sik, a 35-year-old resident of Mapo District, northwestern Seoul, recently bought a 1.4 million won ($1,220) electric bicycle. He uses it to commute to his workplace, which is 6 kilometers (3.7 miles) from his home.

“I just sweat too much when I ride an ordinary bicycle,” Chung said. “But the electric one helps me get to work without having to worry about that.”

Koreans are taking to electric bikes, and manufacturers are pedaling hard to get into the developing market. Bicycle companies, and even automakers like BMW, Mercedes-Benz, Peugeot and Honda, are developing electric bicycles. Chinese consumer electronics company Xiaomi is showing interest in the product. Kia Motors showed off its electric bicycle, the KEB, at the 2014 Geneva Motor Show.

The average price of an electric bike is around 1 million won, but there are some high-end ones that cost more than 10 million won. This wide range has attracted many companies to the market. Moreover, automakers that produce electric cars already have the technology to develop motors and batteries for such bikes. 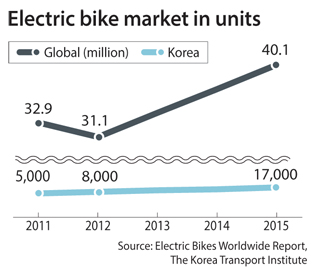 A total of 40.07 million electric bikes were sold last year globally, according to the Electric Bikes Worldwide Report. China’s market is growing in the double digits.

Research firm Navigant Research predicted that the electric bike market will grow from $84 billion in 2013 to $108 billion in 2018.

In Korea, however, there were only 17,000 units sold last year. Local bicycle manufacturers Samchuly Bicycle and Alton Sports and auto parts manufacturer Mando Halla Company are making electric bicycles, but none sell more than 1,000 units a year.

Government regulations restrict the market. Electric bikes are considered motorized vehicle, so you can’t ride them on bicycle paths. A driver’s license is required, cutting out any riders under 16. Insurance is not available, and the speed limit for bikes is 25 to 30 kilometers per hour.

The government announced last month that it would consider revising some regulations. It may allow electric bikes on bike paths.

Many argue that is not enough.

There are two types of electric bicycles. One is the pedal assist system (PAS) type, and other is the throttle type. PAS requires riders to use the bike’s pedals. The throttle type propels itself without any pedaling.

Revisions to the law would only be applicable to the PAS type.

“The throttle-type electric bike doesn’t meet the definition of a bicycle propelled by pedalling by human beings,” said Lee Chi-hun, an official at the Ministry of the Interior.

Industry insiders argue that the throttle type shouldn’t be considered different from PAS bikes, especially since manufacturers have limited their maximum speed to 25 to 30 kilometers per hour.

It requires more advanced technology to develop throttle-type bikes. Industry insiders argue that the government needs to ease regulations to boost local competitiveness in the market.

“It’s like giving up on the technology of throttle-type bikes if the government refuses to treat it as a bicycle,” said Lee Young-hwan, a manager at Alton Sports.