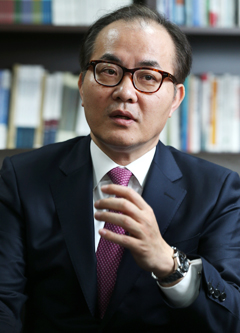 The Korea Institute for National Unification (KINU) celebrated its 25th anniversary on April 8. It has also been a year since the think tank moved its office to Banpo-dong, southern Seoul, from Suyu-dong, northern Seoul, where it was situated for 18 years.

On April 7, the JoongAng Ilbo interviewed the head of the KINU, Choi Jin-wook, 57, who has been working at the institute for 23 years and was appointed as the institute’s head in March 2013.

The KINU held an academic conference on April 8 regarding South Korea’s relationship with the United States, China and North Korea after the North’s fourth nuclear test.

Q. What is the role of the KINU at a time when the inter-Korean relationship is so tense?

A. For now, due to North Korea’s recent provocations and threats, South Korea has to focus on pressuring the North. Only when the North Korean nuclear problem is solved can the inter-Korean relationship improve. But at the same time, South Korea should not stop its effort to build the basis for unification of the Korean Peninsula. The KINU’s role is to devise realistic unification discourse and help the unification policy initiatives of the government.

Now, we are trying to come up with Unification Discourse 3.0, which will be the basis for a specific action plan and will face the new international order, including China’s rise.

Is there a specific method as to how the KINU’s plans will fulfill its aim?

It will be done through expanding the scope of the institute. Last year, for the first time ever, the KINU selected a researcher with a Ph.D. in psychology. This year, we are planning to select researchers from the fields of geography and anthropology. Although the institute studies Korean unification, the researchers who majored in North Korean studies only account for one-third of the entire staff. This is to establish a research environment where thorough studies in the humanities, as well as politics, military issues and security matters, can come together to help establish the identity of the Korean Peninsula after unification and further promote a multicultural and unified Korea.

Additionally, in order to build mutual understanding of Korean unification in the international community, we work to maintain active academic interaction with neighboring countries.

The KINU has been publishing the White Paper on Human Rights in North Korea every year. What is the purpose behind this?

Human rights issues are an important aspect in understanding North Korea. The international community is constantly urging the North Korean leadership to improve its human rights situation, even by mentioning that it will sue North Korea through the International Criminal Court. Thus, the North is very sensitive about this issue. We have to form an atmosphere where Kim Jong-un has no choice but to make changes for the survival of his regime. This is the whole purpose of publishing the white paper.

North Korea announced that the Workers’ Party Congress will take place in the beginning of May.

The Workers’ Party Congress is a typical bluffing strategy of Kim Jong-un. If Kim is all stick and no carrot, the marketization of the North Korean economy will continue to go at its current speed and there will be a drastic change within one to two years. We will study unification by keeping different possibilities in mind.