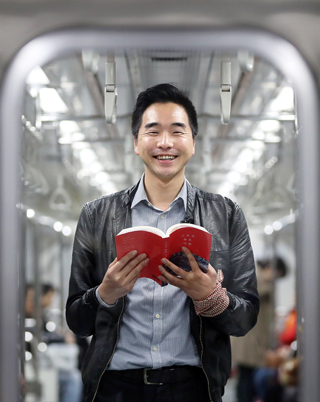 The head of BookMetro, Song Hwa-joon, stands inside a subway train. By using the subway, he tries to spread the culture of joyful, light reading. [KIM SEONG-RYONG]

Picture yourself on a typical subway commute, checking your phone messages, glancing at other passengers, staring at the floor, then back to your phone - when out of nowhere, 20 people dressed in white T-shirts appear around you. You straighten up and watch as they file in and arrange themselves. It’s a flash mob, you realize, but strangely, they don’t break into song or start working through a choreographed routine.

Instead, they take out books and begin quietly reading, their heads barely peeking out from behind the pages.

That’s the scene being created by BookMetro, whose flash mobs have been spreading recently on social media as part of a campaign to promote a culture of light reading by encouraging people to make a habit of reading books on the subway.

“A lot of people say they have no time for books,” says Song Hwa-joon, the 33-year-old founder of BookMetro. “But look, almost everyone on the subway seems to be sitting there with nothing really to do. Isn’t the metro the perfect place to make it a habit to read once a day?”

“Korean people read an average of one book per year, and that was exactly how much I read,” says Song. “But then I joined a debating book club to improve my presentation skills.”

In addition to improving his speaking skills, the club taught Song the pleasures of reading. Reading seemed less stressful in the club, he says, because members came up with many different topics of discussion. Song claims that, for the first time ever, he began to regret not having read any literary classics such as “Demian,” the 1919 novel by Hermann Hesse.

“I wondered why I never bothered reading such books,” he says. “Society always tells us reading is good, but it rarely gives us the opportunity to experience how fun reading a book can actually be. That’s how I came up with the idea for the campaign, with people who would show up and read in a pub or read on the subway.”

BookMetro has been creating its flash mobs for the past four years. Some of its campaigns are partially subsidized by publishing companies and large bookstores such as Kyobo Book Centre, one of Korea’s largest bookstores, as well as the Korean Publishers Association. During their flash mobs, the members of BookMetro hand out books they have received from the sponsoring companies, along with the campaign’s bookmarks and badges.

“Reading a book for about 20 to 30 minutes on the subway is a very simple task,” says Song. “But if about 20 people do it, female high school students chatting loudly move to another place to talk in quiet. People take something to read from their bag and start reading. When small acts add up, we can have a big effect, completely changing the atmosphere of the subway, for example.”

Currently, Song has been working on a project to create a literary tourist attraction near Gimyujeong Station on the Gyeongchun line in Gangwon. The station is named after the famous Korean novelist Kim You-jeong, who wrote works that mostly take place in farming villages, such as “Spring Spring” (1935) and “The Camelias” (1936).

“There are several tourist attractions related to books, including Bongpyeong, which is related to author Lee Hyo-seok’s novel ‘When Buckwheat Flowers Bloom’ [1936] and Yangpyeong County’s Sonagi Village,” says Song. “For all these tourist sites, however, books are merely a means to attract tourists. People don’t actually read books when they visit the places.”

“Sonagi,” or “Rain Shower,” published in 1953, is a short story written by Korean author Hwang Sun-won.

Song has also been working in Gangwon with residents and skilled artisans, including potters and traditional painters, to create a variety of cultural activities for visitors to enjoy and to open a website to promote such programs in the region. Song hopes such efforts will lead to more people reading books during their visits.

“Since Kim You-jeong was a writer during the modern era, only a few generations away, the residents personally knew him or heard stories about him, so visitors can get to know the author better,” he says.

Song has also leased a guesthouse in a small village next to Gimyujeong Station and turned the second floor into a bookstore mostly with Korean literature.

“If our previous work was done inside subway stations, we have now taken it a step further, bringing our work outside,” says Song. “About one million people visit Gimyujeong Station each year, so if I can lead them to the literature village, I think I will come close to actually creating a culture of reading.

“My final goal is to build a BookMetro headquarters and library in Gangwon, which would be a dream come true,” he says.