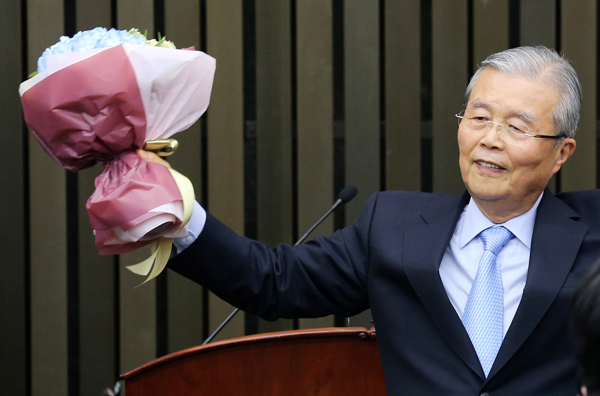 Kim Chong-in, the interim leader of the Minjoo Party of Korea, receives a bouquet of flowers from party officials at a campaign disbanding ceremony in the National Assembly on Friday. [CHO MUN-GYU]

An alliance was proposed by the two main liberal parties following their upset victories in Wednesday’s general election, as the ruling party tried to recruit independent lawmakers to regain its position as the largest party in the 20th National Assembly.

“The People’s Party is also an opposition party, and there are things we can do together,” Kim Chong-in, interim head of the bigger Minjoo Party of Korea, told the JoongAng Ilbo on Thursday. “We will consult with them in the future.”

In Korean politics, the party of the incumbent president is described as the ruling party even when it loses its legislative majority, and its rival parties continue to describe themselves as being in the opposition.

In Wednesday’s general election, the Minjoo Party won 123 seats in the 300-member National Assembly, becoming the largest power in the legislature for the first time since 2004, when it was called the Uri Party. The conservative ruling Saenuri Party won 122 seats, and Ahn Cheol-soo’s People’s Party won 38 seats, making it a brand-new political force. The progressive Justice Party won six seats, and independent candidates won 11.

Together, the Minjoo Party and People’s Party will occupy 161 seats, exceeding a majority. Although they had a troubled past before the election, an alliance would have a strong influence in legislative affairs, including the power to impeach Cabinet members and pass bills.

The People’s Party also talked about an alliance on Friday. “Korea is facing a tsunami [of problems such as an economic crisis],” said Lee Sang-don, a co-head of the party’s campaign. “There will be many times in which we need to work with the Minjoo Party. Chairman Kim’s ideas won’t be different from ours.”

A meeting between Kim and Ahn to form an alliance, however, is not imminent.

The Minjoo Party announced on Friday six new members of its emergency leadership, reflecting the outcome of the election victory. Kim will continue to head the party as interim chairman with the six new members including Rep. Lee Jong-kul, the party’s floor leader.

According to Kim Sung-soo, a Minjoo spokesman, Chin was named an emergency leadership member because he won his fourth term after defecting from the Saenuri Party. “This appointment is symbolic,” the spokesman said.

“Rep. Yang will represent Chungcheong, Rep. Jung will represent the victories in the capital districts and Rep. Kim is representing women,” Kim said. “And Rep. Lee Gae-ho was named because he was the sole winner in South Jeolla.”

After Moon Jae-in, the party’s presidential candidate who was narrowly defeated by President Park Geun-hye in 2012, stepped down from the chairmanship, the party has been operated under an emergency leadership led by Kim Chong-in.

Moon recruited Kim, the veteran strategist who designed Park’s economic campaign in 2012, to head the party’s election campaign in January.

Meanwhile, Moon dismissed speculation that he will retire from politics.

“The Minjoo Party’s defeat in Honam was extremely hurtful,” Moon said in a meeting with journalists on Thursday. “I will put in more humble efforts and wait to see if the Honam people actually abandoned me.”

The Honam region refers to Gwangju and North and South Jeolla provinces. It is a traditional stronghold of the Minjoo Party, but voters there came out strongly for the People’s Party on Wednesday. Of the 28 districts there, it won 23, while the Minjoo Party won only three and the Saenuri Party two.

“A presidential candidate representing the opposition cannot win without Honam’s support. My earlier promise remains unchanged,” Moon said, referring to remarks during the campaign that he would retire from politics if Honam voters withdrew their support for the Minjoo Party.

“I am more than grateful to the voters for having made the Minjoo Party a national party,” Moon said. “The voters gave us great hope of winning the presidential election.”

Kim refused to speculate on Moon’s future. “I have no right to comment on this,” he said in a media interview.

“When Kim was promoting the Minjoo Party’s competitiveness by listing presidential contenders, he named Moon first on the list,” Lee Jae-kyung, a Minjoo spokesman, said. “And he refused to talk about Moon’s future because of Moon’s prestige. Ruling out a front-runner when preparing for a presidential election is nonsense.”