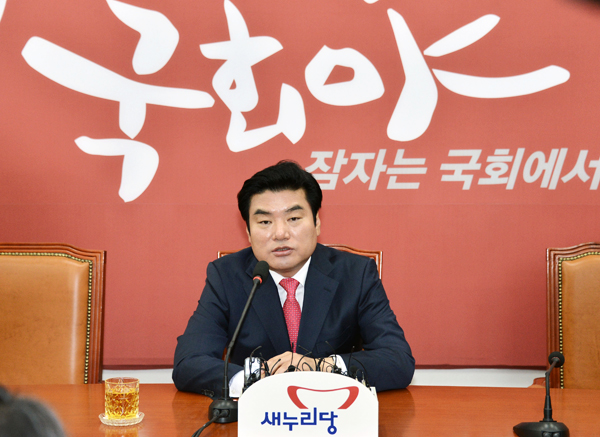 In an attempt to regain its position as the largest party in the National Assembly, the ruling party flung open its doors to lawmakers who left the party after being denied nominations and won races on Wednesday as independents.

The Saenuri Party held an urgent meeting Thursday afternoon to discuss reactions to its crushing defeat in Wednesday’s general election, which reduced it to the second-largest party in the 20th National Assembly.

Eleven independents also won victories, and seven of them were Saenuri members who quit the party after they were denied tickets in the race.

Many of them were considered less-than-loyal to President Park Geun-hye, and the integrity of the selection process, controlled by Park loyalists, was questioned throughout the campaign.

“In order to successfully wrap up the projects of the Park administration and to win the next presidential election, we are opening our doors to all the people who agree with our reformative conservative values,” the Supreme Council of the Saenuri Party announced after the meeting.

During the campaign, when opinion polls suggested it would hold on to its majority, the ruling party was adamant that it would not take back the independent winners. It quickly changed that position after Wednesday’s rout.

The largest party has the power to nominate the National Assembly speaker and chairmen for key standing committees. The Saenuri Party fears that an unfriendly speaker will impede passage of contentious economic bills during the remainder of Park’s presidential term.

Rep. Ahn already had a press conference to announce that he wants to go back to the Saenuri Party.

Rep. Yoo, the former floor leader of the party who was squeezed out after a very public clash with President Park, told reporters that he will eventually go back to the party, but is waiting for the appropriate time. Yoo was once an ally of Park, but the two parted bitterly last year after she publicly condemned him for “politics of betrayal.” Park loyalists have consistently argued that Yoo and his associates have a different philosophy and political identity from the Saenuri Party.

Park loyalists are falling into line. Rep. Choi Kyung-hwan, a confidant of Park, said reinstating Yoo was a matter to be decided by the party.

The Saenuri Party also decided to reorganize its leadership after Chairman Kim Moo-sung stepped down from his post to take responsibility for the defeat. Rep. Won Yoo-chul, the current floor leader, will chair an emergency leadership, the party decided Thursday.

“We will complete selection of the rest of the leadership by next week,” Won said at a press conference on Friday. “In order to reflect the people’s voice and realize a future vision for the party, the leadership will include outside experts.”

The emergency leadership will have up to 15 members including Won.

Won also said the party will hold an early election for a new floor leader. “Because we need to negotiate with the opposition parties about the formation of the next National Assembly, we will elect a new floor leader and chief policy maker in early May,” he said.

The 20th National Assembly will start its four-year term on May 30.

Won also apologized to the public for the party’s embarrassing nomination fracas. “We disappointed the people, and I express my apologies,” he said.

Rep. Na Kyung-won made public her bid for the floor leader job. More are going after the chairmanship. Rep. Lee Ju-young, who won his fifth term on Wednesday, said he will run for the job. Lee is a Park loyalist but more engaging with members of the non-Park faction.

Rep. Lee Jung-hyun, a close associate of Park, also made public his bid immediately after winning his third term on Wednesday. “I will surely change the Saenuri Party,” he said.